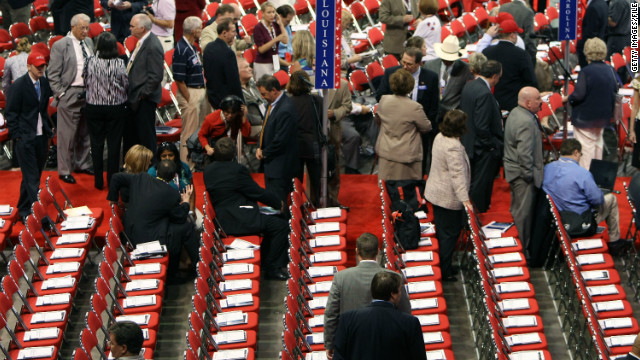 BREAKING: THE CARTAGENA PROBE WIDENS – CNN’s Barbara Starr reports the number of military members being investigated has gone from 10 to 11. The additional military member is from the U.S. Army. With the 11 Secret Service members being investigated– the total number now is now 22-- Secret Service and military: Six are from the Army, two from the Marines, two from the Navy and one from the Air Force. All of the Army personnel are from the 7th Special Forces Group (Airborne). The Marine Corps and Navy personnel involved are all from San Diego, and the Air Force member is from Charleston, South Carolina.

TRAIL TRIVIA
(Answer below)
What former seamstress went on to work as a receptionist for U.S. Rep. John Conyers, D-Michigan?

On Fridays we at Gut Check like to reach out to the masters of the political class for their observations on the world of politics. Today, we are in Scottsdale, Arizona, for the Republican National Committee’s State Chairmen’s meeting, where GOP leaders from around the country have gathered for three days to discuss strategy for the 2012 election. The highlight, of course, was Mitt Romney’s appearance – another sign that he is, by all accounts, the presumptive Republican presidential nominee.

As Romney now turns to the general election, we are now looking to see who will he choose to be his running mate? There have been lots of names floating around, but we decided to ask these state Republican leaders what attributes and qualities they think Romney should look for in a running mate. It is not surprising that many of these Republicans said he should pick a person with solid conservative credentials to help ease any concerns some conservatives might have about him.

A takeaway from the meeting is that Republicans are ready to rally behind Romney, but he still has some work to do to sure up support with conservative Republican voters.

Glenn McCall, South Carolina Republican Party national committeeman
“I think he should look for someone who will complement him and also someone who will have some strength in appealing to a different of segment of the voting bloc in the Republican Party that he is not as strong in, like [Arizona Sen. John] McCain did. I think Sarah Palin really energized voters when he picked her because she appealed to the strong conservative, social conservative, fiscal conservative and made him more legitimate as a result of that choice to the party as a whole. I think Romney is doing a good job, but I think he should look for someone who can really galvanize the base of the party.”

Ruth Ulrich, Louisiana Republican Party national committeewoman
“Someone who can excite the base of the party. I personally think someone from the South would be a good selection, but I’m [RNC] vice chair of the Southern Region so I would think that. I think someone who is very good at putting our actual plans into a language so that people understand our platform. He seems to be having a problem with the tea party and a lot of the grassroots, so someone who has got a very conservative background. I like the idea of a minority or a woman. We have got some great people out there, [Florida Rep.] Allen West would be a very interesting, Condoleezza Rice – I’d love to see Condi on the ticket, I just don’t know if her heart is in it.”

Bill Crocker, Texas Republican Party national committeeman
“Number 1: Somebody who he has confidence in who can move in behind him, if need be, immediately. Number 2: Somebody he can trust. Number 3: Someone who will not hurt him. I don’t think a president is selected on the strength of his vice president.”

Leading CNNPolitics: Secret Service investigation expands in Colombia
Officials warned that more Secret Service resignations could come Friday, stemming from an alleged prostitution scandal in Colombia that is the focus of congressional inquiry and outrage.

Leading Drudge: Bang, Bang
George Zimmerman stunned a Florida court today by taking the stand and apologizing to the parents of Trayvon Martin, who were sitting in the courtroom during Zimmerman's bond hearing. His surprising testimony came the same day that ABC News exclusively obtained a photograph showing the bloodied back of Zimmerman's head, which was apparently taken three minutes after he shot and killed Martin.

Leading HuffPo: Scott Walker Reinstates Program To Give Bonuses, Merit Raises Despite Shortfall
Wisconsin Gov. Scott Walker quietly reinstated a program to give merit raises and bonuses to some state workers even as he preached cost-cutting and pushed through a law reducing most public workers' pay and eliminating their union rights.

Leading Politico: Mitt Romney’s challenge: Convincing GOP he can win
Poll after poll indicates the presidential campaign is a dead heat, but you wouldn’t know it from talking to many Republican professionals. If you gave them truth serum, they would tell you they think Mitt Romney will lose.

Leading New York Times: Forget Flip-Flopper; Romney Is Extreme, Says Obama Camp
Mitt Romney may be inclined to start moving to the political center now that he’s practically got the Republican nomination won and done, but the Obama campaign would much rather keep him right where he’s been for the past few months: in the conservative territory he staked out while battling for Republican primary voters.

- Democrat Joe Manchin: Might vote for Romney -
DEMOCRATIC SEN. JOE MANCHIN OF WEST VIRGINIA IN A NATIONAL JOURNAL ARTICLE: “I’ll look at the options… the people in West Virginia, they basically look at the candidates—whatever you’re running for, whether it be the president itself, or whatever—[they look at] the performance and the result that’s been attained. Right now in West Virginia, these first three and a half years haven’t been that good to West Virginia. So, then you look [at] what the options will be, who will be on the other end.”

- Move Over Rubio, Jeb on VP: I’d consider it -
FORMER FLORIDA GOV. JEB BUSH IN AN INTERVIEW WITH NEWSMAX: “Well I'd consider it. I doubt I'll get a call, and I don't know if it's the right thing for me to do. I didn't run for president for a similar kind of reason, so I'm all in to try to help him get elected.”

­- Palin on Secret Service: The buck stops with Obama -
SARAH PALIN TOLD THIS TO FOX’S GRETA VAN SUSTEREN: “The buck stops with the president. And he's really got to start cracking down and seeing some heads roll. You know, he's got to get rid of these people at the head of these agencies where so many things, obviously, are amiss.”

- Carney: Preposterous to politicize Secret Service scandal -
PRESS SECRETARY JAY CARNEY AT THE WHITE HOUSE PRESS BRIEFING: “It is preposterous to politicize the Secret Service, to politicize the behavior – the terrible conduct of some soldiers in Afghanistan in a war that has been going on for 10 years… What they are doing is trying to turn these incidents, one that is still under investigation, into political advantage. Obviously you recognize that, everyone here recognizes that. I think on the face of it - it is a ridiculous assertion that trivializes both the very serious nature of the endeavor that our military is engaged in in Afghanistan and the very serious nature both of the work that the Secret Service does.”

TRIVIA ANSWER
After Rosa Parks became the “first lady of the civil rights movement” for refusing to move to the back of a Montgomery, Alabama bus in 1955, she suffered a number of hardships because of her outspokenness. She was fired from her job and her husband quit his job after his boss was hostile towards his wife’s public statements. Parks and her husband briefly moved around the country but ended up in Detroit, Michigan in 1957.

After a stint as a seamstress in Detroit, Parks was hired by U.S. Rep. John Conyers, D-Michigan, as a receptionist in his district office. Conyers, who first came to the house in 1965, is currently the second-longest-serving member of the House.

Following Parks’ death on October 24, 2005, Conyers reflected to CNN about how Parks was treated in his office.

“You treated her with deference because she was so quiet, so serene — just a very special person ... There was only one Rosa Parks,” Conyers said.

Earlier this week, President Obama was given the opportunity to reflect on Rosa Parks. Before speaking at a fundraiser in Detroit Michigan on Wednesday, the first African-American president was able to sit briefly on the bus made famous by Parks.

"I just sat in there for a moment and pondered the courage and tenacity that is part of our very recent history but is also part of that long line of folks who sometimes are nameless, oftentimes didn't make the history books, but who constantly insisted on their dignity, their share of the American dream," the president told supporters.