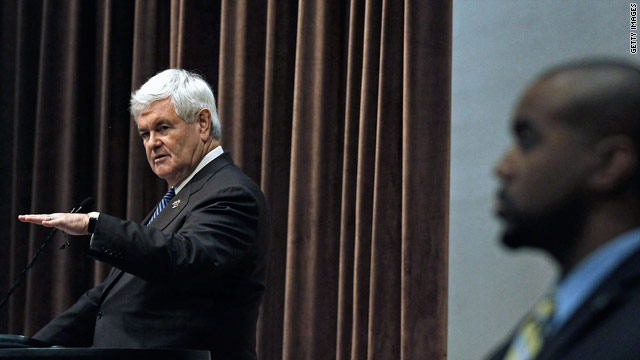 Washington (CNN) - Republican presidential candidate Newt Gingrich's campaign continued to face outrage and claims of "wasteful spending" of taxpayer money on Friday as the candidate keeps his Secret Service detail, which could cost north of $40,000 per day.

Because Gingrich is nearly certain to lose the Republican presidential primary to rival Mitt Romney, Williams' group has urged the former House speaker to give up his protection as a way to save taxpayers' money.

"You know, unfortunately, candidates and politicians love little perks like this. So it's tough to give up these perks," Williams said. "But he has to be realistic and say, 'It's over. The campaign is over…and it's time to make at least a small gesture towards taxpayers and towards the fiscal problems we're in and release the Secret Service from protection.'"

In 2008, Secret Service Director Mark Sullivan told a House committee it cost about $38,000 a day to protect presidential candidates – a number Sullivan expected to rise to $44,000 a day as the campaign waged on with more events and more appearances.

The website The Daily Caller first reported on calls for Gingrich to drop his Secret Service protection.

Gingrich's campaign insisted it will continue to make security decisions based on the advice of experts.

"When it comes to security, we're going to stick with the security experts," Gingrich spokesman R.C. Hammond said.

Hammond was asked if there were still concerns for Gingrich's safety.

"That is usually the reason behind having a security detail," the spokesman responded.

CNN pressed Gingrich's spokesman about the substance of the argument: that giving up the Secret Service protection would save taxpayer money.

"I refer them to the very sincere proposal Newt has made to save the government money," Hammond responded. "Starting with Lean Six Sigma right on down to eliminating the Environmental Protection Agency to reforming the Department of Energy."

"It would take five lifetimes of presidential candidates not taking Secret Service protection to equal the same amount of money that Newt has proposed to save in his presidential campaign," Hammond added.

Asked about the cost associated with protecting a presidential candidate, Secret Service spokesman Brian Leary said the agency does not comment on that type of specific information.

"We don't release it," Leary said.

Leary also stated the Secret Service does not disclose how large a detail Gingrich or any other presidential candidate has.

Secret Service Director Sullivan discussed the costs of protecting a presidential candidate in written testimony to a House committee in March.

"Secret Service activities associated with the 2012 presidential campaign have steadily increased in recent weeks," Sullivan is quoted as saying in the testimony.

Sullivan references Herman Cain's exit from the GOP race, (Cain briefly had Service protection), then is quoted as saying:

"Since that time, the Secret Service has assumed protection for two additional presidential candidates: former Governor Mitt Romney and former Senator Rick Santorum. The agency has established strict campaign financial controls in collaboration with the Department's Chief Financial Officer, and will keep the Committee informed of budgetary impacts associated with candidate protection."

"The FY 2013 budget request for the Secret Service includes a total of $58 million for its continued work associated with the 2012 Presidential Campaign," the written testimony quoted Sullivan as saying.

Gingrich is nearly certain to lose the GOP presidential race to Romney. The candidate badly trails in CNN's delegate estimate, 140 to Romney's 659. And though Gingrich has vowed to stay in the race until Romney clinches the 1,144 delegates needed to win, the former House speaker also admitted in a television interview that Romney is "far and away the most likely Republican nominee."

It's for those reasons that Williams believes the candidate should drop his Secret Service detail.

"Right now Newt Gingrich is a de facto non-candidate," Williams said. "I mean, let's be honest here: Romney is on a clear path to the nomination. And Newt Gingrich just needs to really do the right thing."

"Every gesture to the American taxpayer helps," Williams continued. "$15 trillion debt, $1 trillion deficit. Obviously this isn't going to solve any of our financial woes. But people want to see gestures out of their politicians. And this is one very high profile gesture that he could make…and say, let's save the taxpayers a little bit of money."