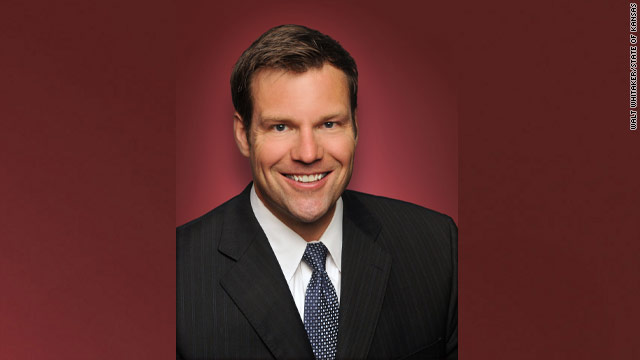 Kobach, who co-authored Arizona's illegal immigration law and currently serves as Kansas Secretary of State, said in an interview Friday that he still considers himself an "informal adviser" to Romney. Romney spokeswoman Andrea Saul agreed with that assessment in an email to CNN.

Earlier this week, Kobach's status with the campaign was thrown into doubt after Politico reported a Romney spokesperson described the fierce critic of illegal immigration as only a "supporter."

Romney is coming under increased pressure to moderate his tough positions on illegal immigration. During the primary season, the former Massachusetts governor advocated for the self-deportation of the undocumented and opposed the DREAM Act, a measure that would provide a path to citizenship for the children of illegal immigrants.

Those positions may be harming Romney's popularity among Latino voters. A recent Pew Survey found Romney trailing President Barack Obama by 40% among Hispanics.

Republican Sen. Marco Rubio, a GOP favorite for vice president, discussed his own version of the DREAM Act at a panel discussion earlier this week. Rubio's measure would offer only a path to legal status, not citizenship.

"I felt we had to find a way to accommodate young people who found themselves in the unfortunate circumstance," Rubio said Thursday about his version of the DREAM Act.

In response to Rubio's remarks, the Romney campaign put out a statement saying the presumptive GOP nominee "will study and consider any proposals on immigration from his Republican partners."

Kobach opposes the original DREAM Act as a form of "amnesty." He said he would have to look at Rubio's proposal before rendering a judgment on the measure.

In an interview with CNN, Kobach said he did not expect Romney to soften his stance on the issue.

"I think it would be unusual for a national presidential candidate to back away from statements he's made in debates and he hasn't shown any sign of doing so," Kobach told CNN.

Kobach said he believes Romney has endorsed the Arizona immigration law known as SB1070 as a model for the country, pointing to the former Massachusetts governor's comments at CNN's GOP debate in February.

"You know, I think you see a model in Arizona," Romney said at the debate.

Romney's aides say he was not endorsing the law as a national model in the debate and was only referring to the state's E-Verify system used by employers to confirm the legal status of their workers.

Saul said Romney backs the Arizona law, known as SB1070, just not as a model for the country.

In a videotaped interview posted on the Christian Broadcasting Network's web site on September 15, 2011, Romney does state his support for the Arizona law.

"Well, I support the Arizona law by recognizing what Arizona has done - underscored the failure of the federal government to do its job," Romney said in the interview.

Kobach sees only clarity in Romney's position on the law.

"He stated very publicly that Arizona's law should be a model for how the federal government enforces its immigration laws. And he's correct there too," Kobach said.