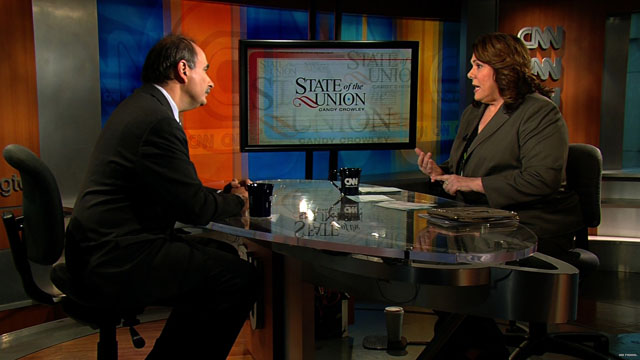 Axelrod said a congressional "reign of terror" has prevented supportive Republicans from cooperating on immigration issues, which were a hallmark of President Barack Obama's 2008 presidential campaign.

"The nature of Washington is not monolithic opposition to everything the chief executive wants to do as a political strategy, and that is what happened here," Axelrod said on CNN's "State of the Union." "I think a lot of Republicans in Congress want to cooperate, know better, but they're in the thralls of this reign of terror from the far right that has dragged the party to the right."

Axelrod said it would be unfair to blame the president when Republicans were unwilling to work with him on a bill and blocked passage of the DREAM Act. Obama has vowed to address reform at the beginning of his second term while both political parties jockey for the Hispanic vote.

"To say that, because you have an implacable group of Republicans in Congress who simply won't let that move, that the president hasn't kept his promise, is a bit disingenuous," Axelrod told CNN Chief Political Correspondent Candy Crowley.

He said there will be a renewed opportunity to tackle the issues "when the president wins re-election," if not before.

"I think that these folks are going to recognize when they lose this election that that was the wrong path to take and now's the time for a season of cooperation," Axelrod said.

Alex Franceschi, the Hispanic press secretary for the Republican National Committee, responded to Axelrod by pointing to the failure of the DREAM Act, which occurred when Democrats controlled both houses of Congress, as evidence of Obama's record on immigration.