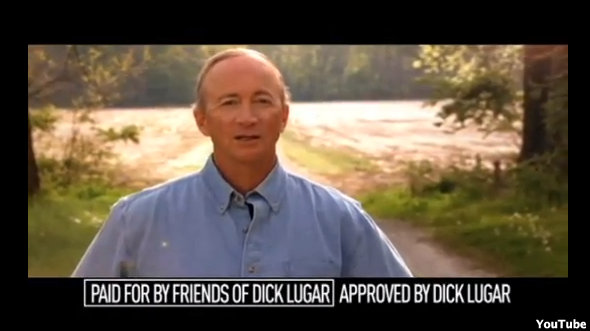 “The truth can take a beating in campaign time, and this year it’s Dick Lugar on the receiving end,” Daniels says in the ad. “It’s funny in a way, these folks from elsewhere, here telling us who’s a real Hoosier.”

Major conservative groups have rallied behind State Treasurer Richard Mourdock in his campaign for the Senate, marking the first serious primary challenge against Lugar since the senator first won the seat in 1976.

Painting Lugar as a Washington insider, critics point to the incumbent’s history of working across the aisle with Senate Democrats in search of bipartisan agreements, as well as his votes in favor of President Barack Obama’s Supreme Court nominees.

In this cycle, Lugar was hit especially hard when opponents questioned the senator’s eligibility, highlighting the fact he hasn’t lived in the state for decades.

The Indiana Election Division, however, ruled in February that Lugar's situation was legal due to a loophole in the state's election law, which states an individual does not need to maintain residency in the state while serving in its capacity.

Recent polls show the race in a dead heat, with only weeks to go until the May 8 primary.

Daniels, a popular governor who flirted with a presidential bid last year, has long supported Lugar over Mourdock.

“The way he votes, the way he lives, I can’t think of anyone so reflective of the thinking, principles, and ideals of our state,” Daniels said. “I’m not for Dick Lugar for what he’s done, but for what he can do.”

Daniels is also rumored to be a promising Republican vice presidential pick, though he has repeatedly pushed back against the idea.