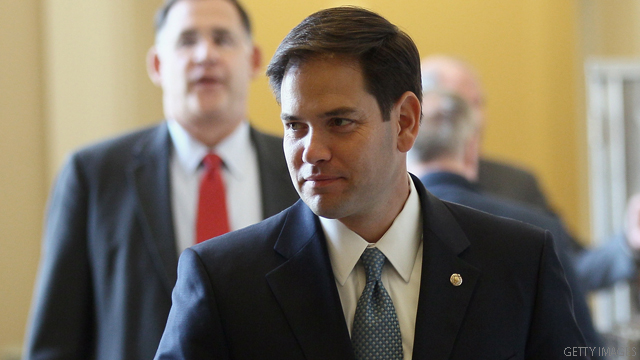 (CNN) – Republican Sen. Marco Rubio of Florida on Sunday predicted that presumptive GOP presidential nominee Mitt Romney will receive more support from Hispanics in his state than Republicans garnered in the 2008 presidential election.

The Romney backer and son of Cuban immigrants said Americans of Hispanic descent, especially in Florida, are focused on the economy.

"They're willing to vote for Republicans or Democrats on an election-by-election cycle," Rubio said in an interview set to air on CNN's "State of the Union." "The No. 1 issue in the Hispanic community, let's be clear, is economic empowerment."

Former President George W. Bush in 2004 won the Hispanic vote in the Sunshine State with 56% support. Then-candidate Barack Obama captured the voting bloc with 57% support in 2008.

Rubio, who is often mentioned as a potential vice-presidential pick, also pushed back against the suggestion his new immigration proposals are at odds with those of Romney.

Rubio is crafting what he calls a conservative alternative to the DREAM Act that would enable the children of illegal immigrants, brought to the U.S. illegally, to achieve legal status if they graduate from a university or vocational school. Once they are granted a visa they could stay in the country while waiting for nonimmigrant status and U.S. citizenship.

The DREAM Act, which failed in Congress, would have granted citizenship to the same group of individuals.

On the campaign stump Romney has said he would veto legislation that grants permanent residency to people who are in the U.S. illegally.

But Rubio said his proposals are in line with the former Massachusetts governor's because his suggestions would work in tandem with the existing immigration system, whereas the DREAM Act would not.

"All this does is award a non-immigrant visa to these kids who find themselves in this very difficult circumstance," Rubio told CNN Chief Political Correspondent Candy Crowley. "At some point in the future they would have no more or no less rights than anybody else in the world. They wouldn't be getting any preferential treatment; they'd be just like any other nonimmigrant visa holder who may decide to access the legal immigration system."