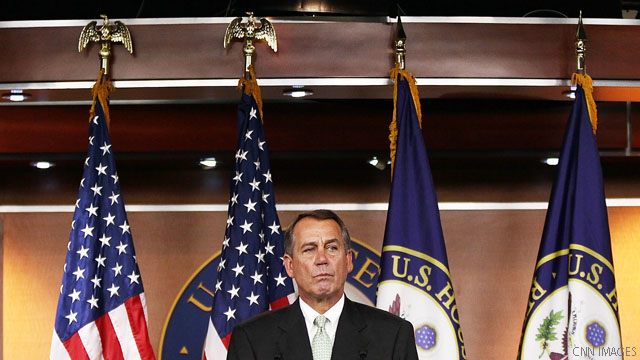 Washington (CNN) - House Speaker John Boehner is sounding some alarm bells, saying "there's a one-in-three chance" Republicans could lose control of the House of Representatives in 2012.

Boehner sounded less than confident he would retain his gavel in an interview slated to air Tuesday on Fox News.

Until now the speaker has not raised any concerns about his party's chances to keep control of the House this fall, and it's unusual for a top party leader to publicly express a pessimistic outlook.

But a spokesman for Boehner's political arm said the speaker was being "candid" and his comments were a deliberate move to remind supporters and potential donors that House Republicans need support this fall.

"We're looking at both sides of the coin," Cory Fritz told CNN. "Of course there is a chance that we could lose and we want to make sure we're doing everything we can so that our members have the resources they need so they can run and win."

Fritz noted there's a perception among some supporters that the "House is kind of lock," but he stressed "it would be mistake for anyone to take that for granted."

Supporters and donors have largely focused on the race for the White House and taking control of the Senate rather than House races. House Democrats would have to pick up 25 seats to retake the majority in the House.

Boehner also told Fox, "we've got a big challenge and we've got work to do."

A senior House GOP leadership aide echoed the need to highlight the importance of the House to the party's agenda for 2012.

"If you're a Republican, no matter what you want to do it's not going to matter if we don't keep the House," the aide said. "We've got to be prepared and people need to realize that."

In the interview, the speaker pointed out there are 32 districts in states where "there is no presidential campaign going to be run, no big Senate race." Specifically Boehner called 18 Congressional districts in California, New York and Illinois "orphan districts," where Romney is not expected to win, and said they are "frankly pretty vulnerable."

Asked about the House GOP candidates in those districts, Fritz said, "The goal is to get others to see that we have a lot of members in these states that need help."

So far Democrats have shown some optimism about the odds of regaining the majority in the House, but have been careful not to sound overconfident.

Asked last week to predict if Democrats could win back the House, their campaign chief, New York Rep. Steve Israel told CNN, "the House is in range."

The number two House Democrat Rep. Steny Hoyer told reporters last month if the economic recovery continued, "our chances are reasonably good that we can take back the House."