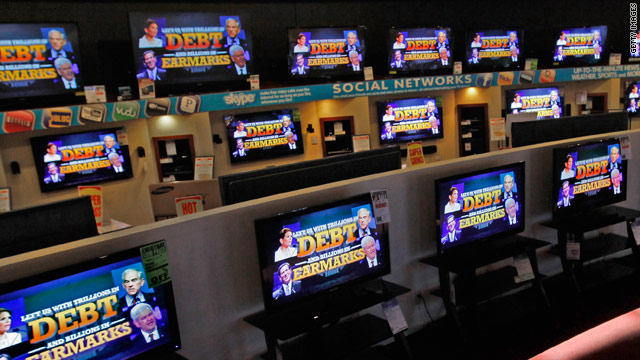 Washington (CNN) - As the general election battle between President Barack Obama and presumed Republican nominee Mitt Romney heats up, so are the television ad wars.

And which groups are putting up television commercials, and where the spots are running, may serve as a preview of the bigger battle to come.

"No matter how Obama spins it, gas costs too much. Tell Obama to stop blaming others and work to pass better energy policies," says the announcer in the ad Crossroads is airing.

Also attacking the president over high fuel prices, the American Energy Alliance, which supports oil industry causes. Their spot went up well before April 10, but the group spent an additional $600,000 to air the ad since Santorum suspended his bid.

Firing back, Obama's re-election team spent nearly $800,000 over the past two weeks to run its own spots, defending the president.

"Under President Obama, domestic oil production is at an eight year high. So why is big oil attacking him? Because he's fighting to end their tax breaks," says the narrator in the Obama campaign ad.

And Priorities USA, the independent super PAC supporting Obama's re-election campaign, has shelled out just over $400,000 to put up commercials.

Just as important as which groups are putting up spots is where the ads are airing.

"It's fair to assume that the collective advertising footprint today is what both sides view as the early battleground of the air war for the presidency. We're talking about 20 or so markets covering parts of Colorado, Iowa, Florida, Nevada, North Carolina, Ohio, Pennsylvania, and Virginia," says CMAG Vice President Elizabeth Wilner.

All of the states are considered battleground states, which will be heavily contested by both Democrats and Republicans in November's presidential election.

"Markets may be added later on, especially more expensive ones that advertisers want to avoid this early. But if any of these "core" markets drop off, that's a tell" adds Wilner. "Tracking states is shorthand for counting electoral votes; tracking media markets is shorthand for tracking voters."

Another state where big bucks have been spent the past two weeks is Pennsylvania, which holds a GOP presidential primary Tuesday. The Romney campaign has shelled out $366,000 to put up spots in the Keystone State, which Republicans think is winnable come November. And Restore Our Future, the pro-Romney super PAC, has spent more than $1.4 million in Pennsylvania and New York, which also holds a primary Tuesday.