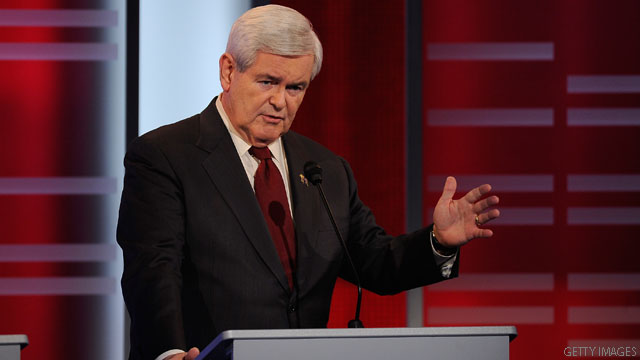 GSA PROBE WIDENS, PART ONE: Rep. Darrel Issa tells CNN's Wolf Blitzer that criminal referrals are expected soon in the GSA investigation. ISSA on CNN's "Situation Room:" "The inspector general, Brian Miller, has a referral underway on a number of the areas including misuse of GSA charges and allegations of bribery. This is related to the contractors used on a 'no bid' basis. WOLF: That sounds like bribery, that would be a crime. ISSA: We believe the charges could include bribery and there could be a referral coming very shortly. WOLF: Define 'very shortly' ISSA: In a matter of days, if it hasn't already happened."

TRAIL TRIVIA
(Answer below)
Who is the famous owner of 2,000 artifacts from Hitler’s Third Reich, Mary Todd Lincoln’s pearl necklace and 24,000 telephone books?

You can learn a lot about politicians by looking at their schedule of events. Here’s what we noticed that is adding political intrigue into a primary night that has lost its punch yet still holds our interest.

Here’s what we are watching as the Connecticut, Delaware, New York, Pennsylvania and Rhode Island primary results are announced tonight:

Newt “Reassess” Watch: The Gingrich campaign tried to deflect the “death watch” news cycle of the morning shows by adding an election night rally in North Carolina to its political calendar. Gingrich forced many reporters to ask if he might drop out of the race should he not perform well in Delaware due to comments he made on NBC’s Today Show hinting at just that. To calm the cycle, Gingrich spokesman R.C. Hammond told reporters – on the record –not to expect a campaign suspension, but perhaps a “reassessment” tonight. Hammond also tried to paint the picture of a "break-in-the-dam scenario" that would come to pass should Gingrich upset Romney in Delaware. And in a note that amused Gut Check and Gingrich watchers worldwide, Hammond pointed out that North Carolina is indeed “where Ronald Reagan revived his campaign.” North Carolina votes for its Gipper on May 8th.

The Romney Pivot Speech & Your Inbox: Romney will not have his campaign event in one of the states holding its primary today. Rather, Romney and his supporters will gather in the state where he announced his candidacy last June: New Hampshire. That says it all, doesn’t it – a swing state with four electoral votes in November. Romney will appear before supporters at 9 p.m. ET in the Radisson/Center of New Hampshire in Manchester to give a speech entitled "A Better America Begins Tomorrow." And be prepared for the Obama campaign to have a singularly-focused rapid response operation.

Santorum Endorsement Watch: Karen and Rick Santorum will appear on “Piers Morgan Tonight” right after Romney’s speech. Santorum has yet to endorse Romney and passed on a chance to do so last week during a conference call with supporters. Will he do so tonight? CNN’s Gloria Borger and Kevin Bohn are reporting that Santorum and Romney are aiming to meet in early May.

John Brabender, a senior Santorum strategist, told CNN Borger and Bohn that the former senator’s goal is to have a policy-oriented meeting in which he tries to find a “comfort level” about the role “social conservatives, tea party activists and blue collar Republicans will play in the campaign and in the Romney administration.” Even so, Brabender said, “We are not walking in there with a litmus test. This is meant to be a candid conversation.”

What will not happen, Brabender said is any kind of a quid pro quo that involves an offer of support in exchange for something from Romney. “I can assure you there will be no quid pro quo as far as Rick Santorum being on the short list (for vice president), no discussion of any talks of Romney helping us with any debt we have, and I doubt there will be any discussion about (Santorum’s role) at the convention.”

Leading CNNPolitics: Romney prepared to solidify lead as 5 states hold primaries
It's the biggest day of Republican primary voting since Super Tuesday back on March 6. But when five states hold contests Tuesday, the only drama left appears to be the size of the margins of victory for all-but-certain GOP presidential nominee Mitt Romney.

Leading Drudge: Eye in the Sky
There are at least 63 active drone sites around the U.S, federal authorities have been forced to reveal following a landmark Freedom of Information lawsuit. The unmanned planes – some of which may have been designed to kill terror suspects – are being launched from locations in 20 states.

Leading Politico: The 2-by-4 campaign for women's votes
It’s no surprise that President Barack Obama has made women central to his reelection strategy. But in these past few months, even he may be taking it to the extreme.

Leading New York Times: Conservative Groups Spending Heavily in Bid to Win a Senate Majority
The conservative groups that helped Republicans win the House in 2010 are pouring money this year into an aggressive campaign to capture the Senate, a goal that they consider just as vital as winning the White House.

- Gingrich may 'reassess' campaign after Delaware -
NEWT GINGRICH PAINTS GRIM PICTURE OF HIS CAMPAIGN IN AN INTERVIEW WITH NBC NEWS: “I think we would need to take a deep look at what we are doing. We will be in North Carolina tomorrow night, and we will look and see what the results are.”

- Obama rallies student's support in North Carolina -
PRESIDENT OBAMA, AT THE UNC STUDENT LOAN RALLY: “The fact is that since most of you were born, tuition and fees at America’s colleges have more than doubled and that forces students like you to take out a lot more loans, there are fewer grants, you rack up more debt. Can I get an amen? AMEN!… I didn’t just get some talking points about this. I didn’t get some policy briefing on this. Michelle and I – we have been in your shoes. Like I said, we didn’t come from wealthy families.”

- Pearce charges Obama administration with double standard -
FORMER ARIZONIA STATE SEN. RUSSELL PEARCE DEFENDS IMMIGRATION LAW AT CONGRESSIONAL HEARING: “Under federal law, sanctuary policies are illegal, but the Obama administration does not sue those cities that adopt such illegal policies. Instead, it chooses to sue Arizona for enforcing the law, protecting its citizens, protecting jobs for lawful residents and protecting the taxpayers and the citizens of this republic in attempting to secure our borders.”

- Edwards’ lawyer: A sin? Yes. A crime? No. -
ALLISON VAN LANINGHAM, JOHN EDWARDS’ LAWYER, DEFENDED HIM IN COURT: “John Edwards is not afraid of the truth. The truth may be a sin, but it is not a crime. … John Edwards committed many sins, but no crime. … Humiliation is what motivated (him) … to not be humiliated by this affair and for his wife not to be humiliated by it either.”

TRIVIA ANSWER
Happy birthday to the Library of Congress, who turned 212 Tuesday. What do you get for the place that appears to have everything?

Gayle Osterberg, the library’s director of communications, provided Gut Check with a list of little-known items it has archived. Among them:

The Library of Congress’ history is an item in itself. The first books for the library were ordered from London and didn’t arrive until 1801, a year after it was established. Though the library started with 964 volumes and nine maps, the entire collection was burned when the British invaded Washington in 1814.

After the capture of Washington, Thomas Jefferson stepped in to revitalize the Library of Congress by selling his personal collection to Congress. Jefferson’s collection was widely considered the most comprehensive and finest of the time.

Even though another major fire destroyed two-thirds of the library in 1851, it bounced back with a great deal of help from Congress. This marked the last major set back for the library, but it quickly grew after the Civil War.