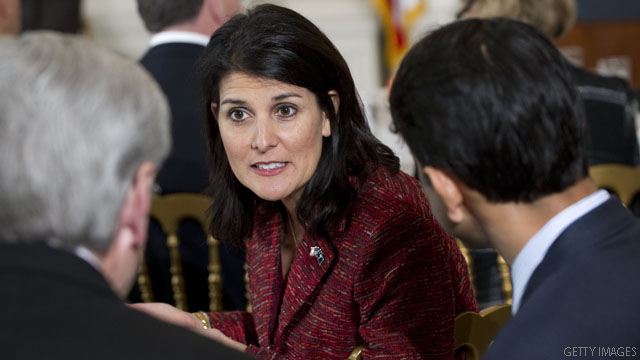 Poll: No bump in Haley's approval

The Winthrop University Poll released Tuesday showed 37.8% of registered Palmetto State voters approved of the first term governor's performance compared to 38.5% who did not. Over 21% were undecided.

Among Republicans and independents who lean toward the GOP, Haley received 59.8% support, with one-in-five disapproving.

Haley, who was elected in 2010 with support from the tea party movement, was a relatively early supporter of Republican presidential frontrunner Mitt Romney and has since been on the receiving end of vice presidential speculation.

However, the opinions of South Carolinians about jobs in the state were a bright spot for the current governor. While 36.5% of voters in February identified jobs and unemployment as the No. 1 issue in the state, 26.4% said the same in the April poll.

There was also a jump among those who were positive about the economic conditions in the state. Over 48% said the climate was good or fairly good, compared to 38% who said the same in February. And almost 20% more felt the economy was getting better, at 58.8%, up from 49.1% in February.

In response to the new figures, Haley spokesman Rob Godfrey said "Polls go up and down."

"Governor Haley is focused on working hard every day to produce results for the people of South Carolina, and we're thrilled that our citizens are starting to feel better about our local economy and our state – they deserve to be feeling better because South Carolina is once again on the move," Godfrey said.

The Winthrop Poll interviewed 981 adults in South Carolina between April 15 and April 22 with a sampling error of plus or minus 3.13 percentage points.