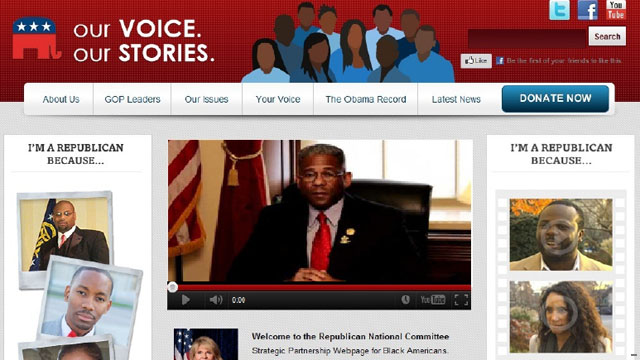 Obama had a stunning 94-3 lead over Mitt Romney among blacks in a Quinnipiac University poll released last week.

But Republicans are trying to loosen the grip.

The Republican National Committee is planning to launch a "black Americans" outreach program as part of their "strategic partnerships" initiative aimed at courting groups that have traditionally leaned Democratic.

The party is set to introduce a new web site, which will go live in the next two weeks, featuring testimonials from some of the party's most prominent black elected officials, including Florida Rep. Allen West, South Carolina Rep. Tim Scott and Florida Lt. Gov. Jennifer Carroll.

"We highlight our elected officials so people understand that we do have Republicans that are elected that are black," said RNC co-chair Sharon Day, the committee's coalitions director. "I don't care if they are a mosquito sprayer or a dog catcher in Arizona, or Jennifer Carroll or Allen West. We have black conservative leaders who stand for their principles."

She said the concerns of African American voters are chiefly economic.

"We need to explain our values to them," Day told CNN. "To be honest with you, their values and our values are more similar than dissimilar. They are not Democratic values, they are Republican values."

"Whether it's African Americans or Caribbean blacks or Asian Americans, the issues are the same," she said. "They want a job, a strong economy, a good education for their children. Those are the things that matter. As Republicans we can bring those things to the table."

Day would not openly criticize the RNC's previous chairman, Michael Steele, the first African American to head the organization.

But she suggested that Steele's efforts at minority outreach – he famously called for the party to hold events in "urban-suburban hip-hop settings" - came across as haphazard and focused on unrealistic and near-sighted political gains instead of long-term dialogue.

"Whatever their focus was, I'm not sure, but mine is not an election cycle, mine is a relationship," she said. "It's not a feel good political campaign site; it is a legacy site, a relationship site, so they have a voice."

Still, Day said that contributions made on the site will be earmarked for African American outreach and recruiting black candidates.