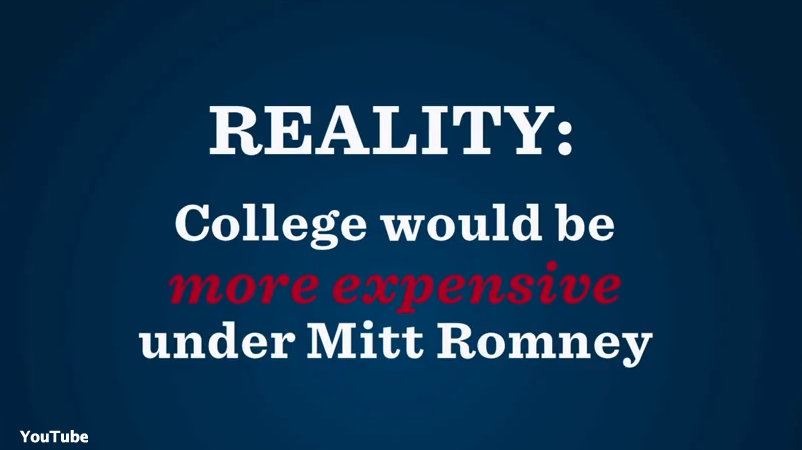 The video, "Mitt Romney vs. Reality: Student Loans Edition," highlights comments made by the likely GOP presidential nominee on Monday when he supported the extension of the lowered interest rates.

"There was some concern that that would expire halfway through the year, and I support extending the temporary relief on interest rates for students," Romney said at a press conference in Pennsylvania.

The interest rate for subsidized Stafford loans is scheduled to double to 6.8% on July 1 if Congress does not vote to extend the current rate of 3.4%. The Senate is expected to take up the bill on Wednesday.

In a political week so far marked by competition for the youth vote, Obama has been on the road making appearances at three universities in battleground states and calling on Congress to pass the extension.

After Romney also endorsed the lowered rate, however, Democrats quickly pounced on his remarks as political pandering.

In a statement on Monday, however, Romney specifically addressed the Stafford program, not Pell Grants.

"I encourage Congress to temporarily extend the current low rate on subsidized undergraduate Stafford loans. I also hope the President and Congress can pass the extension responsibly, that offsets its cost in a way that doesn't harm the job prospects of young Americans," Romney said.

Responding to the ad, Romney's campaign on Wednesday pointed to the low unemployment rates for young adults and recent college graduates.

"President Obama and his allies will do anything to avoid talking about his abysmal economic record and his broken promises to young Americans. Half of recent college graduates are unemployed or struggling for work," Romney spokeswoman Amanda Henneberg said in a statement. "Mitt Romney has a detailed plan to get our economy working again, and he will undo the damage caused by President Obama’s failed policies.”