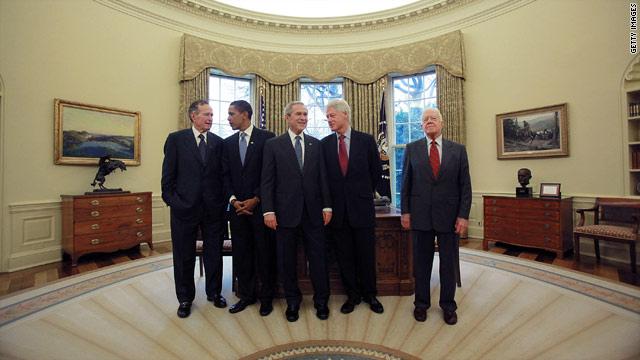 JUST IN: In an exclusive interview with Candy Crowley, Speaker Boehner says Rubio makes the cut (Daniels & Portman do too):

CROWLEY: And if you had to say ‘Look, my number one, what I would look for in a VP…’ if I were Mitt Romney, what is that quality?

BOEHNER: I think the number one quality is, are they capable of being president in the case of an emergency?

CROWLEY: Does that fit someone like, say, Marco Rubio, who is the new kind of rising star…

BOEHNER: Fits a lot of people.

CROWLEY: Does it fit him?

BOEHNER: Fits Marco. It fits Sen. Portman, Gov. Daniels. I could go down a long list of people.

TRAIL TRIVIA
(Answer below)
What Soviet leader invited a U.S. fifth-grader to the Soviet Union by sending her a letter 29 years ago this week?

On Friday’s we reach out to the masters of the political class to see what caught their eye. This week CNN's Dan Merica caught up with Nancy Gibbs and Michael Duffy of Time magazine to get the inside scoop on their new book, “The Presidents Club: Inside the World’s Most Exclusive Fraternity.”

In the book, Duffy, the Washington bureau chief, and Gibbs, editor-at-large, dive into the intricate and powerful relationships between the presidents. Starting with Harry Truman and Herbert Hoover, the book gives readers a detailed perspective on how these men go from heated political campaigns full of vitriol to treating each other as trusted advisers, close confidants and, in some cases, father figures.

And Gibbs and Duffy shed light on the little known fact that a residence just a stone’s throw from the White House is maintained for the former presidents.

While writing the book, you learned a great deal about the relationships between presidents who at one point were political enemies. In your opinion, which presidential relationship grew the most after both men left the White House? Why?

“Ike and Kennedy didn't care for each other, but that didn't keep Ike from guiding his successor through the aftermath of the Bay of Pigs. Ford and Carter pushed past their bitter 1976 election. Bill Clinton and George Herbert Walker Bush fought a tough campaign in 1992, and the loss was as surprising to Bush as it was disappointing. But in keeping with club tradition, he left Clinton a note: ‘You will be our President when you read this note,’ Bush said. ‘I am rooting hard for you.’ President Clinton told us he rereads that note every year –because, of course, the two men became very close. It happened after both were out of office, when President George W. Bush enlisted them to act as global ambassadors for Tsunami relief in 2004. They teamed up again to raise money after Hurricane Katrina, and before long had developed a friendship so close that Clinton has earned a Bush family nickname: They call him thei r ‘Brother from another mother.’”

“That Nixon created it to keep (Lyndon B. Johnson) happy. That Carter wouldn't let Nixon stay there. That so few people even know about it. That it is unmarked and yet inside, it really does feel like the most exclusive frat house in the world.”

What kind of relationship do first ladies have after they leave the White House? If the ex-presidents club is the fraternity, is there some sort of unofficial sorority for the former first ladies?

“The first ladies have a similar experience to the presidents, in ways that can create similar bonds; they know what it is like to live under a microscope, try to raise children under very unusual circumstances, try to keep their husband's feet on the ground, since they are among the few people who can still talk to him as though he's a real person and not the leader of the free world. They do consult each other, especially about protecting their kids from the glare, and Pat Nixon even once arranged a reunion of all the descendants of U.S. presidents. But what truly binds the presidents is something that no one, not even first ladies, can share, and that is the scars that come from holding the office. They all talk about this - ‘There is no experience you can get,’ John F. Kennedy admitted after two years in office, ‘that can possibly prepare you adequately for the presidency.’ Even the successful presidents made the kind of hard decisions that leave all kinds of lingering regrets.”

Do you think today's heated political rhetoric will alter the presidents’ club in any way? Is there an instance where a president could not forgive the way he had been attacked by another president?

“You might think so, but we have not yet seen that. The closest example might be Eisenhower and Truman, who went from being productive partners during Truman's presidency to bitter enemies during Ike's: Truman called Eisenhower a moral coward for refusing to stand up to Joe McCarthy during the 1952 campaign. But even those two found a way to reconcile, even if it did take the murder of another fraternity member to do it. It was when they shared a limo home from the burial of John F. Kennedy that Truman invited Ike to go have a drink. Ike accepted, they got to talking, and so even those two foes were able to rise above their differences.”

Leading Drudge: Spiking The Football - Again
Barack Obama's reelection campaign has released a new ad that focuses on the president's decision to go after Osama bin Laden. This latest ad contradicts President Obama's own pledge after he took out bin Laden. "You know, we don't trot out this stuff as trophies," Obama told CBS soon after the terrorist mastermind had been taken out.

Leading HuffPo: The Hashtag Campaign
President Obama won late-night TV style points this week for slow-jamming his way through a campaign update on Jimmy Fallon's show. But he made a less-noticed but perhaps more noteworthy bid for youth support the day before.

Leading Politico: Why Jeb Bush doesn't want to be vice president
He’s the GOP vice presidential pick that Democrats fear most — a brassy choice who would likely deliver his crucial home state, boost the ticket with Hispanics and Catholics and appeal to both conservatives and independents. The problem: Jeb Bush apparently doesn’t want the job.

Leading New York Times: Florida’s Crucial Hispanic Voters Remain Wary of Romney
If Mitt Romney is to overcome his problem with Hispanic voters, he is going to have to start by changing a lot of minds in central Florida.

- Pelosi: ‘They are playing with fire’ on student loans -
REP. NANCY PELOSI WARNS REPUBLICANS AT A PRESS AVAILABILITY ON CAPITOL HILL: “It is like they have rubbed two stones together and they are playing with fire. They ought not to do it. This prevention saves lives and saves money and there are certainly other places to go in the budget.”

- Boehner: ‘My God, do we have to fight about everything?’ -
SPEAKER JOHN BOEHNER GETS HEATED OVER STUDENT LOANS ON THE HOUSE FLOOR: “Why do people insist that we have to have a political fight on something when there is not fight? There is absolutely no fight. People want to politicize this because it is an election year but my God, do we have to fight about everything? And no, now we are going to have a fight over women’s health. Give me a break! This is the latest plank in the so-called war on women entirely created by colleagues across the aisle (bangs podium) for political gain."

- Obama campaign: Would Romney have made the same decision on bin Laden? -
ROMNEY SPOKESWOMAN ANDREA SAUL REACTS TO AN OMABA CAMPAIGN VIDEO ON OSAMA BIN LADEN: “It's now sad to see the Obama campaign seek to use an event that unified our country to once again divide us, in order to try to distract voters' attention from the failures of his administration. With 23 million Americans struggling for work, our national debt soaring, and household budgets being squeezed like never before, Mitt Romney is focused on strengthening America at home and abroad."

- He may be graying, but Michelle still thinks he is cute -
MICHELLE OBAMA TOUTS HER HUSBAND’S LOOKS IN A SPEECH AT FORT STEWART: “If I can leave you with just one message today I want you all to know that America does have your backs and we are just getting started. We are going to keep at this. We are going to keep on working everyday to serve all of you as well as you have served this country. And the man who has been leading the way is standing right next to me and ladies, I think he is kind of cute.”

The WH just issued veto threat on bill to give student loan interest rate break. Fight is over how to pay for the $6 billion to extend cut

Could Rubio's vote against Violence Against Women Act hurt him in veepstakes? politi.co/IhaN2W

TRIVIA ANSWER
Yuri Andropov only led the former Soviet Union for two years, but on April 25, 1983, the communist leader wrote a letter to Samantha Smith, a fifth-grader from Manchester, Maine. In the letter, Andropov invited the young girl to visit the Soviet Union. Andropov was responding to a note that Smith had sent him, where the student asked if the Soviet Union was planning on starting a nuclear war with the United States.

The Russian people want to “live in peace, to trade and cooperate with all our neighbors on the globe, no matter how close or far away they are, and, certainly, with such a great country as the United States of America,” read the letter.

Smith accepted the invitation and flew to the Soviet Union with her parents. After her visit she became a bit of a celebrity. She wrote a book about her visit and news reports about her labeled her “America's Youngest Ambassador.” Tragically, in August 1985, Smith died in a plane crash at age 13.