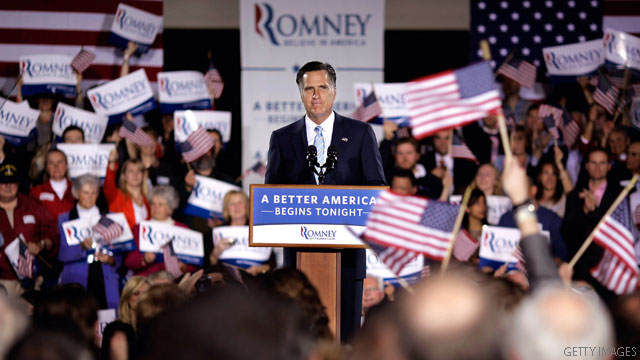 Team Romney: We're off with 'a bang'

(CNN) - Mitt Romney campaign manager Matt Rhoades on Friday issued his first memo analyzing the state of the race for the White House now that Romney is the presumptive nominee, in which he took aim at President Barack Obama's handling of the economy.

Fresh off the news the economy grew at a slower-than-expected rate of 2.2% in the first quarter of 2012 (from January to March, according to initial estimates from the Commerce Department), Rhoades contrasted Romney's Tuesday night speech that he said painted a "positive vision for a better America" with Obama's actions this week, which he said included "slow-jamming the news" and picking a fight over student loans.

"The Obama campaign is like one of those gyrating, intermittent lawn sprinklers, spewing out attacks in seemingly random directions, hoping to get somebody wet somewhere but hoping even more to talk about anything but the unemployment rate, federal debt, gas prices, or rising health insurance premiums," Rhoades wrote. "In his New Hampshire remarks, Governor Romney dubbed this a campaign of 'diversions, distortions and distractions' but noted it wouldn't work. 'It's still about the economy – and we're not stupid.'"

Elections are about choices.

This past week previewed the stark contrast facing voters in this election. Governor Romney's speech Tuesday night in New Hampshire contained a crisp and specific critique of President Obama's policy failures and his own positive vision for a better America.

The speech left the Obama campaign sputtering – with even David Axelrod offering praise. In fifteen minutes, Governor Romney dismantled the myths of "hope and change" with the reality of a failed record that even the President and his campaign are struggling to defend.

President Obama's stagnant, government-centered economy has depressed growth and the American spirit of natural optimism. At a time when a campaign just emerging from a long primary should be struggling, Governor Romney has rapidly unified support and begun to capture the imagination of the country with his vision of a pro-growth economy that will lift us out of the Obama doldrums. It was a big speech to mark a big win that begins a big debate about big things.

President Obama, on the other hand, spent the week slow-jamming the news, striking a Heisman pose, and trying to pick a fight over student loans to help the one-in-two recent college graduates who are either jobless or underemployed as a result of his policies (which is apparently really funny stuff to the President). Unfortunately for him, Republicans agree with the need for a temporary extension, but want it paid for by cutting spending rather than raising taxes. So instead of the fight he was hoping for, he got a debate over taxes and spending – which he wasn't hoping for.

But changing a presidential schedule is not easy, so Obama pressed on anyway with "official" events to attack his political opponents in swing states with target voters 18-29 years of age that he did well with in 2008 but whose support is waning in 2012. His campaign team then announced in a hastily-arranged Wednesday night conference call that his re-election campaign would begin on May 5th (as if the President hasn't been campaigning for re-election non-stop for a year now).

In making this announcement, the Chicago crowd was consistent with what has been a remarkably flailing campaign with no discernible rationale for candidacy. We now know that only one campaign is going to run on President Obama's record of the past three-and-a-half years in office – and it's not the Obama campaign. Without the ability to run on a record of achievement, the incumbent is reduced to a campaign based on scattershot attacks on Governor Romney in particular and Republicans in general.

The Obama campaign is like one of those gyrating, intermittent lawn sprinklers, spewing out attacks in seemingly random directions, hoping to get somebody wet somewhere but hoping even more to talk about anything but the unemployment rate, federal debt, gas prices, or rising health insurance premiums.

In his New Hampshire remarks, Governor Romney dubbed this a campaign of "diversions, distortions and distractions" but noted it wouldn't work. "It's still about the economy – and we're not stupid."

The Obama campaign's calculation is understandable, given the current polling data:

* Nearly two-thirds of Americans believe Obama's policies have either hurt economic conditions in the country or had no impact. (63% – NBC News/WSJ Poll, April 13-17)

* Less than one-third of Americans believe that if President Obama is re-elected, economic conditions in the country will be helped. (31% – NBC News/WSJ Poll, April 13-17)

But this is not just about statistics. As Governor Romney said in New Hampshire, "Is it easier to make ends meet? Is it easier to sell your home or buy a new one? Have you saved what you needed for retirement? Are you making more in your job? Do you have a better chance to get a better job? Do you pay less at the pump?"

Voters have grown disenchanted with President Obama's policies and fear what he would do in a second term. Sensing this, the President's re-election campaign avoids defending their stimulus and health care bills and refuses to say what a second Obama-Biden term would mean in terms of the policies they'd offer. (There should be a reward for anyone who can find an agenda for Obama's second term.)

So the general election begins with a bang on one side and a whimper on the other. One side has a clear rationale for running for president, while the other has no discernible message or agenda. Governor Romney and his campaign seek to make this election about big choices affecting our future, while President Obama and his team want to make it a very small election about dogs, tax returns and his winning TV persona.

Of course, this election will be decided by adults casting ballots in their precincts, not teenagers texting votes from in front of their television sets. That apparently frightens the President and his advisors right now.

P.S. Governor Romney has the right vision and message for America – now we need to make sure Americans hear it. Donate $5 today to help Mitt fight for a better America.