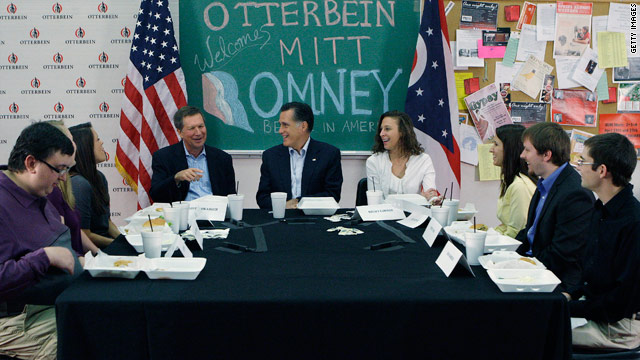 Westerville, Ohio (CNN) - Mitt Romney expanded on his business career and tamped down on the harsh tenor of his recent attacks on President Barack Obama in a speech Friday in the battleground state of Ohio.

Amid calls from some in his party for a more positive message, the presumptive GOP nominee offered an audience at Otterbein University a vision of a conscientious businessman who could deliver results over rhetoric - an oblique reference to his Democratic rival.

Though he avoided saying Obama's name, Romney suggested that in approaching the 2012 presidential contenders, the audience "consider not just the brilliance of their words, but also the facts of their record and what they’ve done, and that will be the best predictor, I believe, of what they’ll do going forward."

Romney said his experience at a private equity firm had taught him to look at the raw facts in approaching his work.

"The impact of gathering facts, gathering information, learning about the reality behind the words, has proven to me, in the business sector, that facts are more important than words and that results are more important than words," he said. "So as you look at the campaign of 2012, you’re gonna hear a lot of words, but you're going to have an opportunity to also look behind the words at the facts."

As he stood before an audience of mostly students after days of campaign jousting with Obama's re-election effort over the youth vote, Romney spoke more generally about his proposals for economic turnaround.

He did, however, tell of meeting with two successful restaurant entrepreneurs - the owners of Jimmy's Johns sandwich chain and Papa John's pizza - and encouraged the young adults to "take a shot, go for it. Take a risk. Get the education. Borrow money if you have to from your parents."