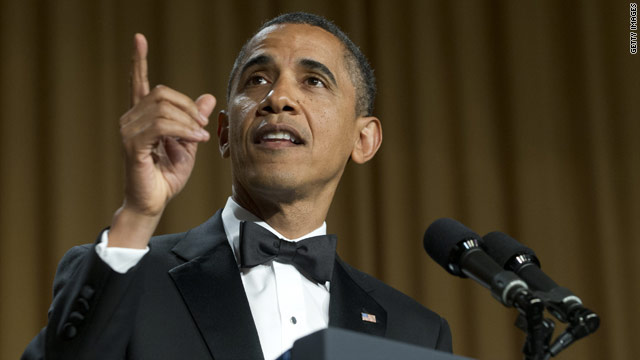 Washington (CNN) – President Barack Obama roasted the 2012 Republican contenders during an annual Saturday night dinner that poked fun at a series of things, including the Secret Service scandal and his graying hair.

"I guess Gov. [Mitt] Romney is feeling good about things because he took a few hours off the other day to see 'The Hunger Games,' " Obama teased his GOP rival. "It's a movie about people who court wealthy sponsors and brutally savage each other until only one contestant is left standing.

"I'm sure this was a great change of pace for him."

Though Romney, who was not present at the annual White House Correspondents' Association Dinner in Washington,was on the receiving end of his share of jokes, Kimmel had fresh material about the president.

Obama is "a man who has done his best to guide us through some difficult times, and paid a heavy price for it," Kimmel said. "There's a term for guys like President Obama."

Obama and Kimmel had a few lines about one-time GOP presidential hopefuls Newt Gingrich and Rick Santorum, both of whom attended the dinner.

"Now, I know at this point many of you were expecting me to go after my likely opponent: Newt Gingrich," Obama deadpanned. "Newt, there's still time, man."

Gingrich, who is expected to officially suspend his campaign this week, was present at the dinner because his "check cleared," Kimmel cracked, referring to a ballot filing fee check that bounced after Gingrich's campaign closed the account.

A day before the dinner, Kimmel said Obama is a hard person to roast because he isn't "cartoony," like the past two White House occupants.

But Romney, he predicted, won't be the next to move into the Oval Office.

"Some people say Mitt Romney won't be elected president because he's Mormon," Kimmel said. "We elected an African-American president. We would absolutely elect a Mormon president. Just not Mitt Romney."

Obama played off of a notion that Romney is out of touch and outdated.

"Recently his campaign criticized me for slow jamming the news with Jimmy Fallon," Obama quipped, referring to his appearance on the Tuesday program.

"In fact, I understand Governor Romney was so upset, he asked his staff if he could get some equal time on the Merv Griffin show," Obama said.

Though Griffin went on to other projects, his namesake show went off the air in the mid-1980s.

But, Obama said, he and Romney have a few things in common.

"We both think of our wives as our better halves and polls show to an alarmingly insulting extent the American people agree."

The dinner was Obama's fourth as president. It has been a ritual in Washington since 1920, when it was first held to boost communication between the press and the president.

It was open only to men until 1962, when President John F. Kennedy said he would not attend unless women were invited.