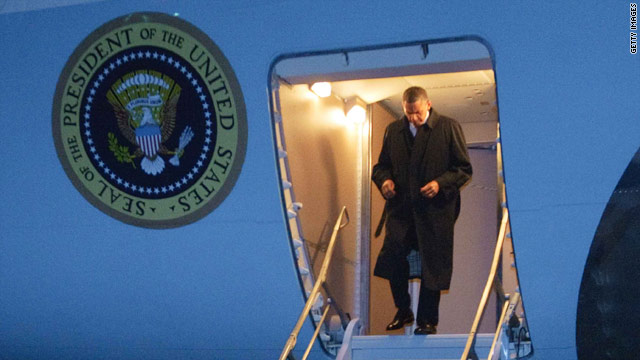 BREAKING: President Barack Obama made a surprise visit to Afghanistan, landing at the Bagram Air Base on board a darkened Air Force One. Obama traveled to Kabul to meet with Afghan president Hamid Karzai and sign a new Strategic Partnership Agreement. The president will speak to the American -people in a live televised address from Afghanistan on CNN at 7:30pm ET.

FAST FACTS: There are 88,000 US troops in Afghanistan currently.

VIDEO of President Obama’s arrival in the dark of night in Afghanistan.

TRAIL TRIVIA
(Answer below)
What building was dedicated on this day in 1931?

President Barack Obama's surprise visit to Afghanistan has not only caught our eye, but is being watched around the world as the president will shortly announce a strategic partnership agreement between the U.S. and Afghanistan. President Obama will address the nation live at 7:30 p.m. ET from Afghanistan.

Here in the nation's capital, the risky trip sucked the oxygen out of the Republican charge of politicizing the assassination of Osama bin Laden.

First off, it was precarious territory to begin with. It is hard to think that any president – regardless of political party – would not try to claim credit for making the call for the Navy Seals to kill bin Laden.

Obama's decision to green light the raid that killed America's Enemy #1 has inarguably helped the Democratic Party try to wrestle the national security mantle away from Republican Party. Adding to that, today the president reminded the world about that move in a dangerous, dramatic fashion by flying directly into a war zone to meet with U.S. troops.

The question remains how, if at all, Romney should navigate the rest of what is a difficult news cycle. (It is one of the few rules left to not criticize a president in the theatre of war).

This morning, hours before it was announced Obama had landed in Afghanistan, Romney offered praise and criticism in talking about the one year anniversary of bin Laden's death. In a prepared statement, Romney offered rare praise to the president personally. "I commend all those who planned and conducted the bin Laden raid, and I applaud President Obama for giving the go ahead for the mission," Romney said in the statement.

But in a CBS interview, Romney defended himself from Obama's not so subtle jab that Romney might not have issued the same order. "I think it was very disappointing for the president to try to make this a political item by suggesting that I wouldn't have ordered such a raid," Romney said on CBS 'This Morning.' "Of course I would have. Any thinking American would have ordered exactly the same thing. But of course you give the president the credit for the fact that he did so."

Romney also urged that bin Laden's death should not be a "politically divisive event.”

"There are plenty of differences between President Obama and myself, but let's not make up ones based on what he might not have," Romney said in the CBS interview. "It's disappointing and it's unfortunate, and I think it's taking an event that really brought America together that was the culmination of a lot of work by a lot of people and an enormous sacrifice, and some people who put their lives very much on the line. Let's not use this as a political football."

Governor Bob McDonnell (R-Virginia) took another tact, telling CNN's Peter Hamby that the bin Laden raid was "gutsy" but the election will instead turn on economic issues.

"It was a good moment for President Obama," McDonnell said in a phone interview. "And that's been one of the areas that this president has done okay. Those were some gutsy decisions that he made to take out bin Laden and some other terrorists."

However, McDonnell said he believes barring dramatic developments on the world scene, the election will be decided by the economy.

Nonetheless, we will be watching Obama's speech from Afghanistan tonight on CNN at 7:30 and look with equal interest to Philadelphia - where Romney is holding two fundraisers - to see if the presumptive GOP nominee responds to Obama's surprise visit.

Leading CNNPolitics: Obama lands in Afghanistan in surprise visit
President Barack Obama made a previously unannounced visit to Afghanistan on Tuesday, the first anniversary of the U.S. raid that killed Osama bin Laden in neighboring Pakistan.

Leading Drudge: Gloating In Afghanistan
President Barack Obama made a previously unannounced visit to Afghanistan on Tuesday, the first anniversary of the U.S. raid that killed Osama bin Laden in neighboring Pakistan.

Leading HuffPo: Obama Campaign Strikes Squarely At Romney’s Swiss Bank Account
As Mitt Romney campaigned across Ohio during the Republican primary, there was a sense that his message of adding a private-sector touch to national politics was finally resonating among voters. The former Massachusetts governor was still, at that point, embroiled in a tight contest with former Sen. Rick Santorum (R-Pa.). But polls were showing him running away with a victory in the Buckeye State.

Leading Politico: Obama makes surprise visit to Afghanistan
President Barack Obama has landed in Afghanistan Tuesday for a surprise whirlwind trip that will culminate in a live, televised address to the American people at 7:30 p.m.

Leading New York Times: A Surprise Trip to Kabul by Obama Marks Shift in Ties
President Obama landed here Tuesday, on a surprise visit, to sign a strategic partnership agreement with Afghanistan meant to mark the beginning of the end of a war that has lasted for more than a decade.

- McCain reserves criticism, says Obama’s Afghan visit a good thing -
SEN. JOHN MCCAIN IN AN EXCLUSIVE INTERVIEW WITH CNN’S DANA BASH: “I think it's a good thing. I think it's always good when the president goes to where young men and women are in harm’s way and I think that many of us who have been involved are very supportive of the strategic partnership agreement, which I’m sure he'll be talking about. And we think the agreement is good, we obviously would like to know the details.”

- Newt says goodbye, doesn’t mention Mitt Romney -
NEWT GINGRICH IN A CAMPAIGN VIDEO SENT TO HIS SUPPORTERS: "Because of your help and your support, we were able to put up a terrific campaign, and I want you to know that Callista and I are both very grateful to everybody across the country," Gingrich said. "I want you to know that we're going to continue out there on the road. Both Callista and I will be talking, campaigning, making speeches, doing everything we can to help defeat Barack Obama."

- Romney congratulates Bloomberg, but says he didn’t ask for endorsement –
MITT ROMNEY TALKS ABOUT HIS MORNING MEETING WITH NEW YORK MAYOR MICHAEL BLOOMBERG AT A FIRE STATION IN NEW YORK: “The mayor and I had a very nice chat this morning. We talked about the progress the city is making. It’s really quite an extraordinary story about the number of murders that are down in the city, the economic revitalization of the city. You have to look at what New York has done, under this mayor, and under Mayor Bloomberg and say the city is just a remarkable place. Doing a superb job from everything he reported.”

- Ray Kelly: Still worried about the lone wolves -
NYPD COMMISSIONER RAY KELLY SPOKE CANDIDLY ABOUT TERROR THREATS ON CNN’S “STARTING POINT”: “We think that certainly core al Qaeda has been significantly degraded I think to a large extent to the predator attacks, but these types of findings show they are still very much functioning. We're certainly concerned about al Qaeda surrogates in Somalia, in Maghreb, in other parts of Africa. And we’re concerned of course about the lone wolves.”

- Walker spends anniversary… with Chris Christie, then steps in it -
WISCONISN GOV. SCOTT WALKER AT AN EVENT TUESDAY IN OAK CREEK, WISCONSIN: “This day, 20 years ago – geez, she's already nodding her head like `Oh, he is going to talk about this. I can't believe this.’ Twenty years ago tonight, Tonette and I went on our first date and that night I knew I was going to marry the first lady of Wisconsin, Tonette Walker. Now, it took me awhile to convince her about that but I knew that very night after we spent the night there and – just, I have known it for 20 years. But this campaign and this time showed us even more – and she is going 20 – what's that? (PAUSE) No – we didn't spend that night. We are at that dinner. (LAUGHTER) No, no, no, no… dinner there. It seemed like - actually we started at the place where we ate, went and got custard, came back. It seemed like we spent the night there but we went home to our separate homes (holds red tie to his face) matches my face doesn't it?”

TRIVIA ANSWER
Eighty-one years ago today President Herbert Hoover stood in Washington and hit a symbolic button. Two-hundred and twenty-seven miles north in New York City, the Empire State Building’s electric lights went on and at 102-stories and 1,250 feet high, the tallest building in the world was dedicated.

The building was a model in efficient construction. Not only was it completed in one year – ahead of schedule – but it also came in under budget.

The Empire State Building did not lose its standing as the world’s tallest building until 1972, when the World Trade Center in Lower Manhattan was completed. The World Trade Center was tragically destroyed in the terrorist attacks of September 11, 2001, and the title of tallest building in New York City again fell to the Empire State Building, until Monday.

When a tall steel beam was hoisted and secured to the top of the Freedom Tower at 1 World Trade Center, the uncompleted building surpassed the height of the Empire State Building at 1,271 feet. The completed tower will eventually become the tallest building in f the United States, at 1,776 feet.

GOT NEWS?
Our inbox awaits: gutcheck@cnn.com
Anyone can sign up for Gut Check by emailing gutcheck@cnn.com.
If you want to read this product online, check out CNN.com/GutCheck every day at 5pm ET. Do you have any friends that want to be added to our distribution list? Send their emails to Gutcheck@cnn.com. We also want to give a shout out to Dan Merica, who runs our Twitter account @gutCheckCNN and enriches this product every single day.