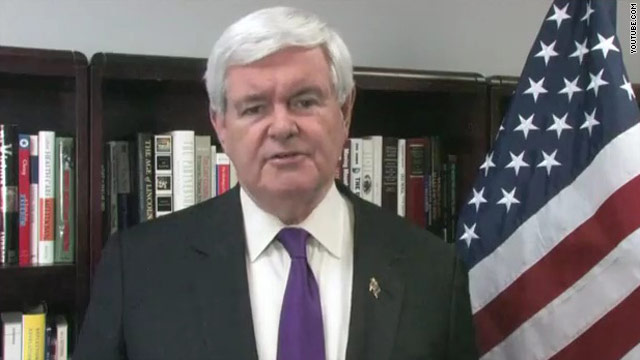 Gingrich: Thanks and goodbye

(CNN) – Soon to be former Republican presidential candidate Newt Gingrich on Tuesday thanked his supporters and vowed to continue working to defeat President Barack Obama via web video ahead of his official campaign suspension on Wednesday.

"Because of your help and your support, we were able to put up a terrific campaign, and I want you to know that Callista and I are both very grateful to everybody across the country," Gingrich said. "I want you to know that we're going to continue out there on the road. Both Callista and I will be talking, campaigning, making speeches, doing everything we can to help defeat Barack Obama."

The former House speaker, who announced his White House bid last May, is scheduled to suspend his campaign in the afternoon on Wednesday and back Mitt Romney, the presumptive Republican presidential nominee. Although Romney will be in the Washington, DC area during the day, sources familiar with the session told CNN Chief Political Analyst Gloria Borger not to expect Romney to be in attendance at the announcement.

While Romney is not expected at the Wednesday afternoon event, the Romney and Gingrich campaigns have discussed the two appearing at a second event in the near future, according to a source familiar with the discussions.

The two campaigns have had ongoing talks since Gingrich signalled last week he was going to pull out.

Gingrich did not mention the former Massachusetts governor by name in the video to supporters, but he stressed the importance of voters joining the effort to oust Obama from the White House.

"A re-election of Barack Obama will be a genuine disaster. And all of us have an obligation I think to do everything we can to defeat Barack Obama," he said. "I hope you'll join us in this historic effort because this is still the most historic election in our lifetime."