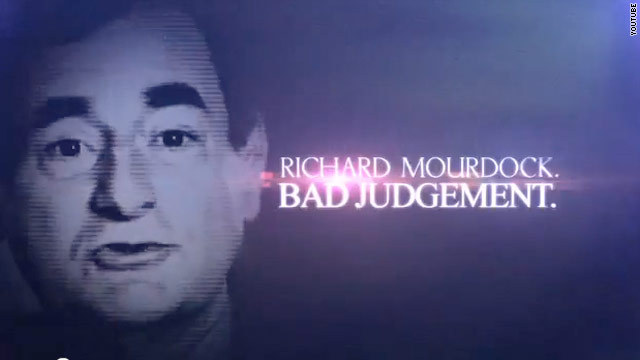 Indiana Republicans will choose next Tuesday between Lugar, the longest serving Republican in the Senate, and Mourdock, who has the support of major tea party and other conservative groups.

The 30-second spot then goes on to slam Mourdock for investing in junk bonds as Indiana's treasurer.

"Mourdock gambled Hoosier pensions on junk bonds, wasted millions covering up his mistake and risked thousands of Hoosier jobs suing to shut Chrysler down," the narrator says.
The claim against Mourdock – that he misspent state dollars in bad investments – has been made before, both by Lugar's campaign and the conservative group American Action Network.

The nonpartisan Factcheck.org said previous ads slamming Mourdock for investing in junk bonds "strain the facts," noting Mourdock didn't oversee the only fund that lost over a million dollars.

"It's true that three state funds that purchased Chrysler debt in 2008 lost money when that company went through bankruptcy in 2009," Factcheck.org writes. "But Mourdock didn't oversee the investments of the Indiana Teacher's Retirement Fund, which is the only one that actually lost 'millions.'"

The ad released Tuesday continues to delve into Mourdock's record as treasurer, hitting the candidate for his ethics. Clips are played from television newscasts reporting on claims Mourdock took illegal property tax deductions and conducted an "electronic break-in."

Mourdock maintains on his campaign website the property tax discrepancy was a clerical error made by the Marion County Auditor.

CNN affiliate WISH-TV reported on the alleged electronic break-in in mid-April, saying an email from Mourdock's campaign manager encouraged staffers to raid a state GOP database for voter contact information. The Mourdock campaign said they did nothing inappropriate.

On MSNBC Tuesday, Mourdock responded to the new Lugar campaign ad, labeling the spot "the last gasp of a very desperate campaign."