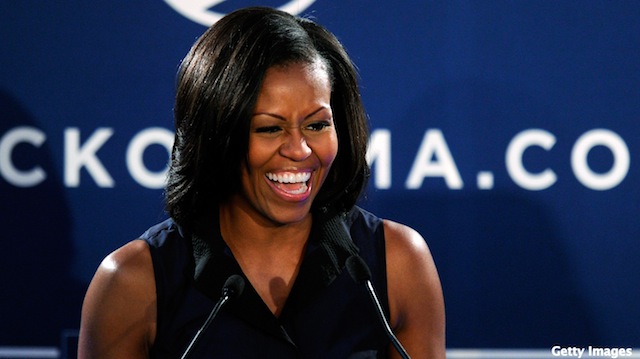 (CNN) - First lady Michelle Obama wrapped up a day of campaign stops in New Mexico and Nevada on Tuesday, finishing her four-state swing in likely battleground territory this fall.

As her husband landed in Afghanistan for a surprise trip, the first lady was speaking at a private fundraising event at the Los Poblanos Inn and Cultural Center near Albuquerque, New Mexico.

She urged supporters to consider "what's at stake" in November and warned the race could come down to a few thousand votes.

"Will we continue all the change we've begun, all the progress that we've made? Or will we just allow everything we've fought for to just slip away," she said in remarks that lasted about 20 minutes, according to pool repots.

The first lady touched on immigration issues, specifically policies that would allow illegal immigrants brought to the U.S. as children to earn a path toward citizenship by graduating college or serving in the military, also known as the proposed DREAM Act.

Her appearance in New Mexico came hours after a stop in Las Vegas, Nevada, where she helped rake in more than $300,000 for the president's re-election campaign.

Addressing about 130 people at a private breakfast, the first lady touted her husband's record in the White House and mentioned the raid that killed Osama bin Laden.

Guests paid at least $2,500 to attend the Las Vegas breakfast, which took place at a café inside The Springs Preserve, a large nature attraction located a few miles from the Las Vegas Strip.

"I'm not going to kid you. This journey is going to be long. And it's going to be hard," the first lady said of the campaign. "And there are going to be plenty of twists and turns along the way. That's how change always happens in this country."

On Monday, Mrs. Obama also appeared at campaign events in Colorado and Arizona. All four states are expected to be coveted states in the general election this fall. In 2008, Obama won Colorado, Nevada and New Mexico, but rival candidate Sen. John McCain took his home state of Arizona.