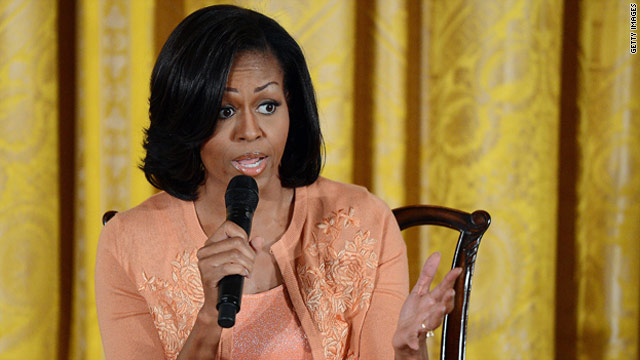 (CNN) - Michelle Obama waxed optimistic about the policies instituted by her husband and his political future during a Monday evening campaign stop in Arizona, a state that looks increasingly competitive in the upcoming general election.

The first lady highlighted what she called the achievements in the president's first term, including the start of an economic turnaround, health care reform, equal pay legislation and the killing of Osama bin Laden, while appearing before hundreds of supporters in Tucson.

The Arizona stop is one in a series of campaign stops in likely 2012 western battleground states. Democratic representatives have appeared increasingly optimistic about the president's chances of winning the state that he lost by over eight percentage points in the 2008 election.

Discussing Obama's chances of winning the Grand Canyon State in November at the beginning of her remarks, Michelle Obama said "I know we are going to do it because of people like you."

She also gave a shout out to Ron Barber, the Democrat running in the June 12 special election to fill the 8th District seat left vacant by former Rep. Gabrielle Giffords, whose mother attended the Obama event on Monday.

Next month's winner will be the incumbent in the November election for the newly-drawn Congressional District 2.

"I also want to recognize Ron Barber," she said. "He is going to do a fantastic job representing his district in Washington. We will be happy to have him out there."

On the eve of the raid that killed former al Qaeda leader Osama bin Laden, Michelle Obama asked the crowd "not to forget all this administration has done to keep our country safe and restore our standing in the world."

"I mean, thanks to our brave men and women in uniform, we finally brought to justice the man behind the 9/11 attacks and so many other horrific acts of terror," she said.