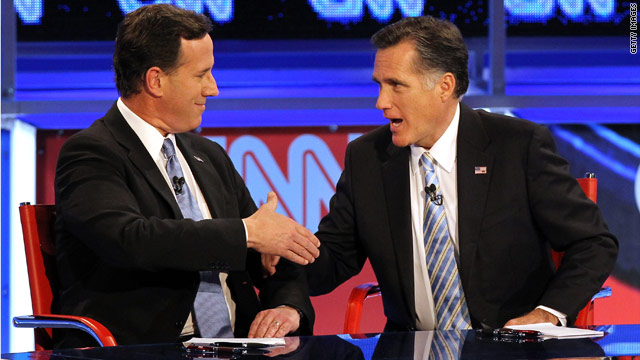 Romney-Santorum Friday meeting to be private

The get together is to be private with no photo opportunity, John Brabender, a senior adviser to Santorum's campaign told CNN. The location of the get together is not being disclosed and there will be no press coverage allowed at the meeting site.

The meeting is a chance for the two men to get to know each other because they did not have the time or opportunity during the campaign and discuss the general election campaign, Brabender told CNN.

"It is an important meeting," he said. "Both are looking forward to the meeting and…defeating Barack Obama."

Santorum's team has said one issue clearly is off the table: any talk of Romney helping to retire the former Senator's campaign debt.

"The Senator does not want that on the agenda," Brabender said adding it is "not appropriate to that meeting."

The campaign has about a million dollars of debt currently.

After Santorum announced he was suspending his bid for the Republican presidential nomination on April 10, supporters donated a couple of hundred thousand dollars online, Brabender said.

"While each day we move closer to balancing our books, this debt is weighing on us and we need to settle our accounts. We are relying on you, as we have throughout the campaign, because you have been such a loyal supporter," Santorum said in an email to his backers Monday night – the close of the monthly finance reporting period.

As CNN Chief Political Analyst Gloria Borger reported last week, an immediate endorsement of Romney by his one-time rival is not expected at this meeting. Santorum wants assurances from Romney and his associates they are committed to the conservative principles important to him and that session will be part of a process.

"I am sure endorsement will be discussed at this meeting," Brabender said. "The Senator is very clear if he does endorse it will be done for the right reasons, not the wrong reasons." He mentioned other campaigns have asked for some help with retiring their debt.

While Santorum is not expected to press Romney himself for a prominent speaking role at the Republican convention in Tampa, his supporters definitely think he deserves one.

"As a Republican consultant it seems logical to me someone who had such impact" winning the support of blue collar Republicans, tea party Republicans and conservative Republicans "it certainly would make sense to make that they would want" to give him such a spot, Brabender said. He emphasized he was giving his personal opinion as a GOP operative and was not speaking in his role as a Santorum adviser.

Santorum and Brabender sat down for a brief meeting with some Romney advisers last week.

"It was just a casual conversation" and it did not involve discussing the upcoming session, Brabender said. "It was not meant to be a precursor," he added but was more a chance for people to acquaint themselves.

As to Santorum's next political steps, CNN is told to expect an announcement next week.

"Let me also be clear because I've read some reports to the contrary: we aren't backing down from the fight for our conservative ideals. Very shortly I'll come off the sidelines and get back into the fight, because in order to defeat Barack Obama and restore our conservative principles to government we must work together or we will never succeed," Santorum said in his email to supporters.