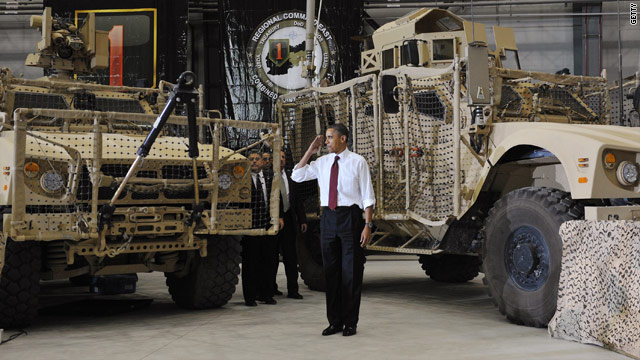 Washington (CNN) – The White House strongly denied Tuesday that President Barack Obama's surprise trip to Afghanistan was executed for political motives, saying the visit was more than a year in the making.

On a conference call with reporters, a senior administration official speaking from Bagram Air Base in Afghanistan was asked if the trip – made on the one-year anniversary of the raid that killed Osama bin Laden – was opening the president to charges of "craven politics."

"I think what could not be clearer is that for 20 months the United States and Afghanistan have been negotiating a strategic partnership agreement," the official said. "The negotiations were completed in recent weeks and then the documents for the strategic partnership went to the presidents for their review. The two presidents had set a clear goal for the agreement to be signed before the summit in Chicago."

NATO is slated to hold meetings in Chicago in mid-May.

Obama has come under fire in recent days by Republicans who say he is politicizing the one year anniversary of bin Laden's death ahead of November's general election. Obama's likely GOP rival Mitt Romney has said he is "disappointed" by the president's handling of the anniversary, though he has not made any public statement about Obama's trip.

In the call Tuesday, the administration official said Obama and Afghan President Hamid Karzai had been working for months to finalize the strategic partnership agreement, which provides a framework for U.S.-Afghanistan relations after the U.S. and allied troop withdrawal.

"We had a window of time here, a number of weeks, to sign the agreement," the official said. "It was the president's preference to sign that agreement on Afghan soil, it was President Karzai's preference to invite President Obama to sign that agreement on Afghan soil, because it's an indication of the progress that we have made together and the future that we are building together here in Afghanistan."

The anniversary of bin Laden's death was a "resonant day" for Obama to visit troops in Afghanistan, the official said, because of the hard work of the U.S. military in the raid that brought down the al Qaeda chief.

"It was always the president's intention to spend this anniversary with our troops, because it was an extraordinary group of U.S. service members who carried out that operation," the official said.