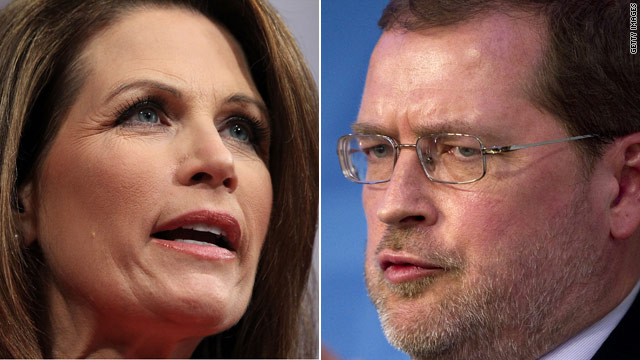 On Twitter, Bachmann announced Wednesday her endorsement of the Indiana state treasurer, less than a week before Mourdock and Lugar face off in the Republican primary.

"I am happy to endorse @richardmourdock today. Richard is a true conservative and we can count on him to stand up for our values," the former GOP presidential candidate wrote on Twitter Wednesday afternoon.

Mourdock and Lugar have gone to head-to-head during recent months in one of the nation's most heated and closely-watched Senate primary fights. Fueled by tea party support, Mourdock is hoping to oust the longtime incumbent from his current position as the most senior Republican in the Senate.

Mourdock has had support from top conservative groups, including Club for Growth and FreedomWorks, and last week Sarah Palin made headlines when she threw her voice in the race for Mourdock.

While Norquist praised Lugar, the top Republican on the Senate Foreign Affairs committee, for his work on national security issues, he faulted the senator on economic policies.

"Senator Lugar's time in the Senate has been a rather long Seinfeld episode with 'no learning' taking place," Norquist wrote on his Facebook page.

Responding to the endorsement, Lugar's campaign hit back and defended the senator for having a "proven record of fighting for lower taxes and less spending."

"Senator Dick Lugar is proud to be endorsed by Indiana's leading job creators – a striking contrast to Mourdock's support from DC interest groups that bear zero responsibility for job creation or economic development in Indiana," campaign spokesman Andy Fisher said in a statement.