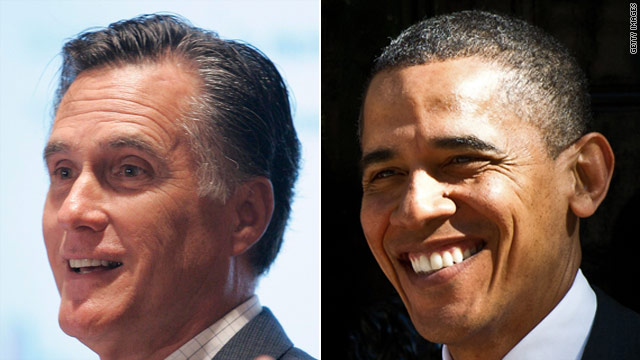 Poll: Romney catches up to Obama in Florida, Ohio

(CNN) – Mitt Romney gained ground on President Barack Obama in the key states of Florida and Ohio over the last month, according to a poll of the battleground states released Thursday.

In Pennsylvania, which was also included in the Quinnipiac University battleground poll, Obama widened his six-point lead in March to an eight-point lead, 47% to 39%.

Romney and Obama were basically tied - 44% to 43% - in Florida, where Obama had a seven point advantage over Romney in the March 28 survey. In Ohio, Obama had 44% and Romney 42% in the state which went by six points for Obama in March.

Between the Quinnipiac surveys released in March and today, Romney's main rivals for the GOP nomination either exited the race or stepped down their criticism of the former Massachusetts governor, allowing him to focus his energy against Obama.

According to the poll, women tend towards Obama's candidacy in both Pennsylvania, where Obama leads Romney by 17%, and Ohio, where he leads by 13%. Romney has a 10-point advantage over Obama among men in Ohio, however in both Pennsylvania and Florida, men split nearly evenly.

The survey also indicated a majority of likely voters in each state say the US should not be involved in Afghanistan, where President Obama on Tuesday visited some of the 90,000 American troops stationed there.

Familiar names tied to the surveyed states top the poll's vice presidential inquiries. Sen. Marco Rubio of Florida is the pick of 40% of his home state, and Sen. Rob Portman is favored by 26% of Ohio voters. New Jersey Gov. Chris Christie polled well in all three states, receiving the support of between 14% and 28% of voters.

Each of the three battleground state polls was conducted by telephone between April 25 and May 1. Each has a sampling error of plus or minus 2.9 percent.