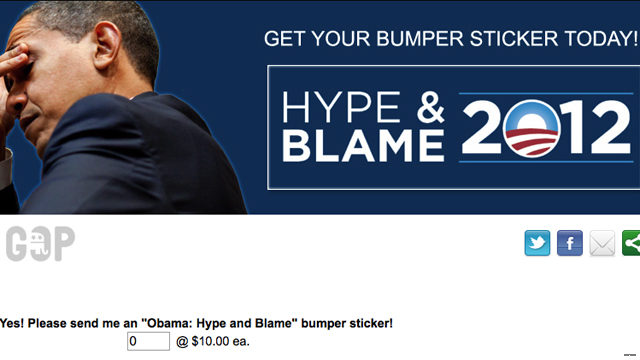 RNC to push 'Hype and Blame'

It was the highly successful slogan from Barack Obama's 2008 campaign for the White House. While President Obama has replaced his 2008 slogan with "Forward" for his re-election bid, Republicans are using a variation of the old slogan to attack the president.

GOP officials say that starting Thursday the Republican National Committee and the campaign of presumptive GOP presidential nominee Mitt Romney will begin using the slogan "Hype and Blame" as part of their push to accuse Obama of breaking promises during his three and a half years in the White House.

"Obama has no record to run on so he's out on the trail resorting to the same tactics he campaigned against in 2008. He has a litany of broken promises so what does he do? Lay blame, make excuses, run on gimmicks and engage in divisive politics. Four years later we know the candidate of Hope and Change is now Hype and Blame," said RNC press secretary Kirsten Kukowski.

The new messaging comes just two days before the president's trip to the battleground states of Ohio and Virginia, when he will hold his first official re-election campaign rallies.

Kukowski said the push includes a conference call Thursday morning with the RNC and state parties in Ohio and Virginia, the selling of "Hype and Blame" bumper stickers, as well as "digital advertising and fundraising strategy, research pieces, full court press on TV and radio, op-eds, state party engagement."

The RNC's counterpart, the Democratic National Committee, was quick to respond.

"If you listen to Mitt Romney, the RNC or their surrogates on any given day, the slogan of their campaign should be 'Distort and Distract'. The attacks coming from the RNC and the Romney campaign completely ignore facts, all of which the American people are well aware – President Obama's actions helped save the America auto industry, created over 4 million jobs in the last two years, and strengthened the manufacturing industry," Melanie Roussell, DNC spokeswoman, said.

According to a CNN/ORC International poll conducted last month, Americans said that by a 50% to 29% margin Obama rather than Romney would be more likely to stand up for what they believe.