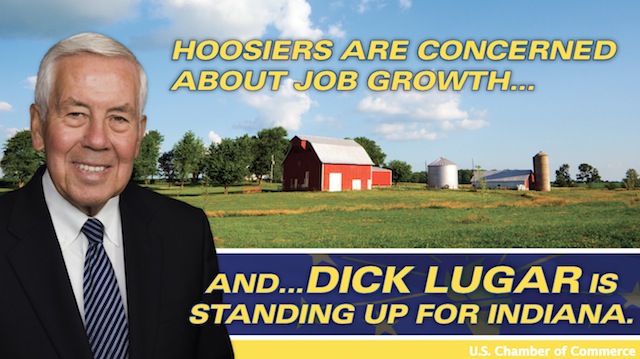 (CNN) - The U.S. Chamber of Commerce, a major conservative, pro-business group, is showing its support for Sen. Dick Lugar with hundreds of thousands of direct mail pieces, just days before the longtime senator faces his biggest primary challenge in 35 years.

In the flier, the group praises Lugar for supporting the Keystone pipeline, a proposal that Republicans argue would create thousands of private sector jobs but has faced heavy pushback from Democrats and the president over environmental concerns.

The Chamber also highlights Lugar's votes against unpopular measures among the GOP, including the financial reform and healthcare reform bills passed in 2010, as well as the so-called cap and trade legislation.

Lugar, the most senior Republican in the Senate, is vying for a seventh term against Republican challenger and state treasurer Richard Mourdock.

Backed by tea party momentum and high-profile conservative endorsements, Mourdock has waged a serious threat against the senator as the two head into the primary on Tuesday.

Lugar critics paint the six-term senator as a Washington insider whose nearly-four decades in office have pushed him to the center on economic issues.

But Lugar's team touts endorsements by more establishment forces within the Republican Party, including the state's popular governor Mitch Daniels and former GOP presidential nominee John McCain, who argue the senator's experience and track record make him more fit to serve than his challenger.

The U.S Chamber of Commerce first announced its support for Lugar in mid-April.

"We're endorsing Senator Lugar because of his proven record and ability to get things done in support of Indiana job creation and economic growth," Rob Engstrom, Chamber's senior vice president and national political director, said in a statement.