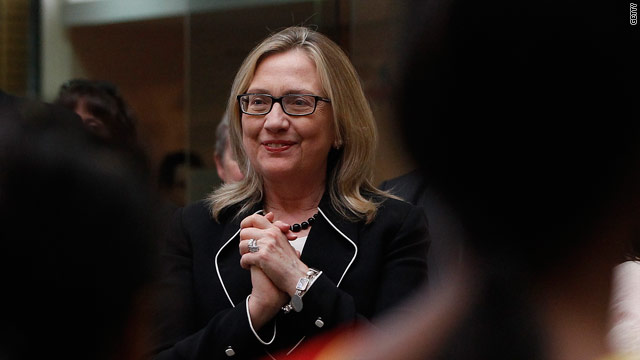 (CNN) – Hillary Clinton laughed off the perpetual conversation over her appearance that landed in the spotlight once again Monday when a picture of her sporting glasses sans make-up made the rounds on the internet.

"I feel so relieved to be at the stage I'm at in my life right now," the secretary of state told CNN Foreign Affairs Correspondent Jill Dougherty in an interview. "Because you know if I want to wear my glasses I'm wearing my glasses. If I want to wear my hair back I'm pulling my hair back. You know at some point it's just not something that deserves a lot of time and attention."

"And if others want to worry about it, I let them do the worrying for a change," Clinton added.

Clinton appeared without makeup, except lipstick, wearing thick rimmed glasses during a recent news conference in Dhaka, Bangladesh as part of a trip to promote democracy abroad.

The image of the former New York senator with longer hair landed on The Drudge Report with the caption "Hillary Au Naturale." Clinton appeared throughout her presidential bid in 2008 with short hair and pants suits, often the subject of ridicule. Since assuming her top state department post, Clinton has varied her wardrobe and her light locks now hit at her shoulders.

Read more from the interview here.