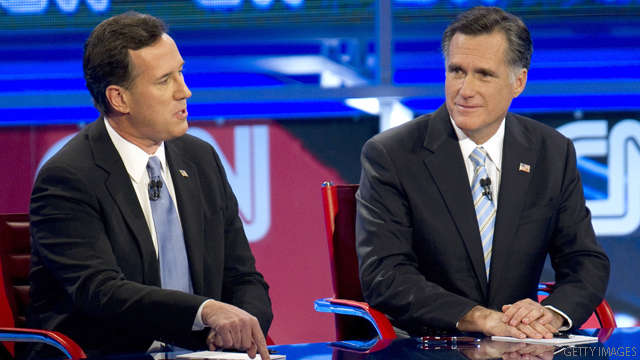 In wake of endorsement, no Romney-Santorum event yet planned

Washington (CNN) – Those questioning how heartfelt Rick Santorum's email late Monday night to supporters was - as it didn't get to an endorsement of Mitt Romney until the 13th paragraph - are reading too much into it, a Santorum adviser says.

John Brabender, a senior Santorum strategist, told CNN that the former senator wanted to methodically lay out his reasoning and thinking to his supporters and if people are trying to read more into it than that, it's "something that doesn't really exist." Brabender also pointed out the title of the e-mail was "Governor Romney."

Romney seemed happy with the email issuing a statement Tuesday morning that thanked Santorum and his wife Karen for the endorsement. He said that he and Santorum shared the same "absolute commitment to reversing the failing policies of the Obama Administration, from its assault on freedom of conscience to its feckless foreign policy."

Since Santorum suspended his campaign on April 10th, aides to him had said the former senator would eventually endorse Romney despite their bitter primary battle because he wanted to do whatever he could to help defeat President Barack Obama in the general election. But he also wanted assurances that some of his priorities would be included in Romney's general election campaign.

"This was a very thorough, thoughtful" process, Brabender said of the path to the endorsement.

Also raising questions among political observers is the fact the endorsement was done in such a non-public way.

There are no plans for Romney and Santorum to do a joint unity event - Brabender told CNN there have been no conversations between the two camps about scheduling such an event.

"If that is helpful" to defeating Obama, Brabender said, Santorum is "more than willing" to participate.

Brabender said he notified aides to Romney about the pending endorsement earlier Monday, and a copy of the endorsement emailed Monday evening to Santorum supporters was sent to Romney aides.

Romney and Santorum have not spoken since their 90-minute private meeting in Pittsburgh, Pennsylvania, on Friday, Brabender said.

Santorum was pleased with that session and was particularly heartened that there was a commitment by Romney to emphasize economic policies that will help strengthen families, Brabender said.

Santorum will have a major platform to further expand on his thoughts, his feelings about Romney and his future plans when he appears before a nationwide television audience Tuesday evening on NBC's "The Tonight Show with Jay Leno."

Santorum will announce exactly how he envisions his future, though it will not be this week, Brabender said.