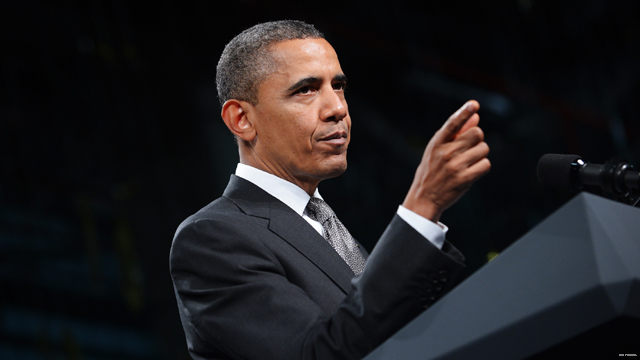 (CNN) – President Barack Obama on Tuesday called on Congress to back a five-point plan in his latest attempt to paint the legislature as ineffective ahead of his re-election bid.

Obama unveiled the list of five proposals, all previously addressed by the current White House, while encouraging members of Congress to take "bold action."

"At this make or break moment for America's middle class, there is no excuse for inaction. There's no excuse for dragging our feet, none," Obama said in a speech at a high-tech facility at the State University of New York at Albany. "The truth is, the only way to accelerate the job creation that takes place on a scale that is needed is bold action from Congress."

Obama has consistently painted Congress as the roadblock between his agenda and the assistance he says is needed for the American people and lumped the policies of Congressional Republicans and presumptive Republican presidential nominee Mitt Romney together.

Republicans have countered, pointing to Obama administration policies they have supported, including the payroll tax cut and their own budget proposals that they argue would help eliminate the burden on middle class families and take steps toward economic reform.

The president referenced some of the recent bipartisan action between the two branches of government on Tuesday, but said more is needed because "the size of the challenges we face requires us to do more."

Pataki, the former three-term governor, said the Albany NanoTech Complex that Obama visited Tuesday was an example of what the American economy "can and should be."

"I also think it contrasts why President Obama's economic policies, particularly when it relates to jobs, has been a complete and utter failure," Pataki said.

In a statement, Romney campaign spokeswoman Andrea Saul said "President Obama should follow through on his own 'to-do' list" before he tells Congress how to act.

"No amount of 'to-do' lists can hide the fact that the President's policies have failed to make life better for the millions of Americans who are struggling in the Obama economy," Saul said.