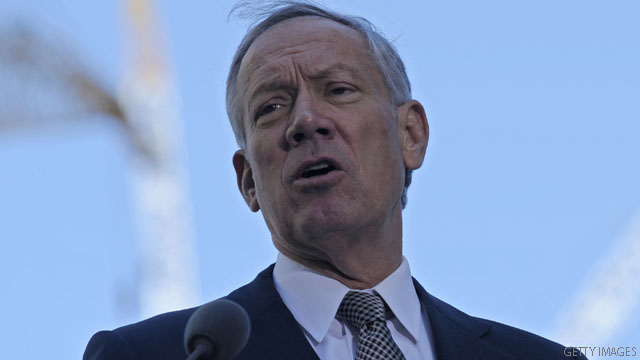 "Either you're for something or you're against it, and Vice President Biden has made it plain he's for it. President Obama on the other hand is looking to have both sides," Pataki said on a conference call with reporters.

"He would turn back the clock on all of the progress this President has made to advance equal rights. On the issues important to gays and lesbians, Governor Romney hasn't evolved – he has regressed," LaBolt said in a statement.

On Sunday, Biden expressed support for same-sex marriage, comments the White House insisted did not represent a change from past statements. Obama, who once opposed same-sex marriage, has taken the official position that his stance on the issue is "evolving." He has hinted at fundraisers that there is more work to be done, leading many in the LGBT community to believe the president may work to legalize same-sex marriage on the national level during a second term.

Pataki, the former Republican three-term governor, said Obama is attempting to garner support from constituents who fall on both sides of the issue. He also compared the ongoing conversation surrounding same-sex marriage to the president's open mic moment with then-Russian President Dmitry Medvedev, "where he said just wait until after the election, I'll have a lot more flexibility then."

"Well I think the American people deserve to know today where President Obama stands today and where he will stand next year on this issue," Pataki said.

Obama will appear with current Democratic New York Gov. Andrew Cuomo at the College of Nanoscale Science and Engineering's Albany NanoTech Complex at the State University of New York Albany for an event on Tuesday. The first-term Democrat has publicly supported same-sex marriage and signed a law legalizing the unions last year.