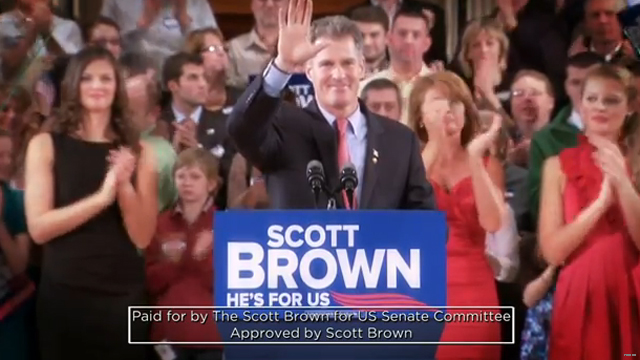 (CNN) - Bragging about being bipartisan didn't help Sen. Dick Lugar of Indiana, but it may be the path to re-election for fellow Republican Sen. Scott Brown of Massachusetts.

The morning after Lugar, the Senate's longest serving Republican who was known as a moderate willing to work with Democrats, lost his re-nomination bid to a more conservative candidate, Brown's campaign announced they were going up with their first TV ad of the junior senator's re-election bid. The spot, titled "Independent," touts Brown's willingness to work with those across the aisle and never mentions that he's a Republican.

Brown pulled an upset in January 2010, winning a special election to fill the seat of the late Democratic Sen. Ted Kennedy, who served in the Senate for nearly four decades. Brown won the contest thanks to the support of many of the state's large pool of independent voters. Brown is now fighting for re-election against the well-funded Elizabeth Warren, a former consumer protection advocate in the Obama administration who is the overwhelming favorite to win the Democratic Senate nomination in the Bay State.

The ad starts with clip of Brown from his 2010 election victory saying "tonight, the independent majority has delivered a great victory."

And the spot includes a clip of Lesley Stahl of CBS News saying on "60 Minutes" that Brown's "turned out to be unpredictably independent, and beholden to no one."

The commercial also features Brown talking about how he delivered on his promise to be an independent voter in the Senate. An email release announcing the ad highlighted that a recent analysis from Congressional Quarterly "found that Brown is the second-most bipartisan Senator, voting with his party 54 percent of the time."

The race in Massachusetts is one of the most high profile and most expensive of the 33 Senate contests this year. Warren raised nearly $7 million so far this year, more than double what Brown has brought in, but Brown has an advantage of $4 million when it comes to cash on hand.

Two of the top non-partisan political handicappers, Stuart Rothenberg and Charlie Cook, list the race as a toss-up.