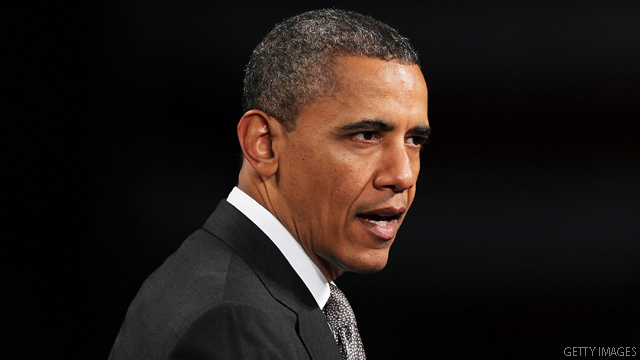 BREAKING… OBAMA’s GAME CHANGE: In an interview with Robin Roberts of ABC News, President Obama announces he supports gay marriage: “I have been going through an evolution on this issue. I have always been adamant that gay and lesbian Americans should be treated fairly and equally. And that's why in addition to everything we've done in this administration, rolling back don't ask, don't tell so that outstanding Americans can defend our country. I've stood on the side of broader equality for the LGBT community. And I hesitated on gay marriage in part because I thought civil unions would be sufficient, that that was something that would give people hospital visitation rights and other elements that we take for granted. And I was sensitive to the fact that for a lot of people, you know, the word marriage was something that evokes very powerful traditions, religious beliefs and so forth. … At a certain point, I've just concluded that for me personally, it is important for me to go ahead and affirm that I think same-sex couples should be able to get married.”

Mitt Romney at an event in Oklahoma City: “My view is marriage itself is relationship between a man and a woman and that's my own preference. I know other people have differing views, but I have the same view that I've had since running for office.”

GLAAD President Herndon Graddick, “The arc of history today bent a little closer to equality for every American.”

Nancy Pelosi, in a Democratic Congressional Campaign Committee e-mail, “Isn't it great? President Obama just announced that he supports marriage equality for all Americans. He joins many of us who have long supported marriage equality.”

National Organization for Marriage President Brian Brown: “The definition of marriage was already headed for the ballot in four states this fall; now it will be one of the defining issues of the presidential election. No state in this country has ever voted for gay marriage."

Alex Castellanos, GOP consultant and CNN contributor, “This is going to have some political cost to him. But I am proud of him for doing it.”

Bob Vander Plaats, President of the Family Leader, in a phone interview with CNN's Shannon Travis: “They were already fired up to get rid of Obama. This will only make them more on fire to get rid of Obama. And if I’m Romney today, I’m smiling. Because everybody knows the base has not been all that inspired about Romney. But Romney has been clear, throughout the campaign, that he supports one man, one woman marriage… This decision may have made Barack Obama a one-term president.”

North Carolina voters, on constitutional amendment to provide that marriage between one man and one woman is the only domestic legal union that shall be valid or recognized in the state:

What president made Mother’s Day a national holiday on this day in the early 1900s?

If you cover politics long enough, something becomes oddly amusing: Washington is perpetually shocked over election results. On Tuesday you saw it as dazed congressmen on Capitol Hill walked around in a stupor, realizing that Sen. Dick Lugar, a respected institution, was going to lose his seat.

Why? Because the adage is true: “All politics is local.” That is why these statements, all from people wanting to serve in the same institution at the same time, caught our eye:

U.S. Sen. Joe Manchin, D-West Virginia, after winning his Democratic primary: “I will continue to work hard to stop the political bickering and bring Democrats, independents and Republicans together so we can put our country first and do what is right for the next generation.”

U.S. Sen. Scott Brown, R-Massachusetts, in a new campaign ad, entitled “Independent”: “60 Minutes” news clip of CBS reporter Leslie Stahl: "He's turned out to be unpredictably independent, and beholden to no one." BROWN: "We have more work to do on getting this economy moving again. Working together, we can restore the American Dream for all of us."

U.S. Sen. Richard Lugar, R-Indiana, after losing his primary: “Aggressive partisanship deepens cynicism, sharpens political vendettas and depletes the national reserve of good will that is critical to our survival in hard times. Certainly this was understood by President Reagan, who worked with Democrats frequently and showed flexibility that would be ridiculed today."

Indiana State Treasurer Richard Mourdock, on CNN’s “Starting Point” after defeating Lugar in the Republican primary: “I'm a huge student of American history and I recognize this is one of those times where there's great polarization between the two parties. And frankly the ideas for which the parties are working are really at opposite ends of the spectrum. I don't think there's going to be a lot of successful compromise. Hence you have the deadlock we have today. What I've said about compromise, I hope to build a conservative majority so bipartisanship becomes Democrats joining Republicans.”

Leading Drudge: Now Embraces Gay Marriage
President Obama today announced that he now supports same-sex marriage, reversing his longstanding opposition amid growing pressure from the Democratic base and even his own vice president.

Leading HuffPo: I Do
In a nod to a dramatic shift in public opinion, Barack Obama on Wednesday became the first sitting president to announce his support for same-sex marriage.

Leading Politico: Obama backs gay marriage
President Barack Obama said Wednesday that he now supports gay marriage, saying “I’ve just concluded that for me personally it is important for me to go ahead and affirm that I think same sex couples should be able to get married.”

Leading New York Times: Obama Says Same-Sex Marriage Should Be Legal
President Obama on Wednesday ended nearly two years of “evolving” on the issue of same-sex marriage by publicly endorsing it in a television interview, taking a definitive stand on one of the most contentious and politically charged social issues of the day.

- We are both practicing Christians -
PRESIDENT OBAMA IN AN ABC NEWS INTERVIEW WITH ROBIN ROBERTS: “This is something that, you know, we’ve talked about over the years and she, you know, she feels the same way, she feels the same way that I do. And that is that, in the end the values that I care most deeply about and she cares most deeply about is how we treat other people and, you know, I, you know, we are both practicing Christians and obviously this position may be considered to put us at odds with the views of others but, you know, when we think about our faith, the thing at root that we think about is, not only Christ sacrificing himself on our behalf, but it’s also the Golden Rule, you know, treat others the way you would want to be treated. And I think that’s what we try to impart to our kids and that’s what motivates me as president and I figure the most consistent I can be in being true to those precepts, the better I’ll be as a as a dad and a husband and hopefully the better I’ll be as president.”

- Will bringing religion into his reasoning hurt him? -
ERICK ERICKSON, CNN CONTRIBUTOR, TO GUT CHECK: “I think it makes him look weak and under duress to do it a day after North Carolina and a day before the Clooney fundraiser. Will it matter? I don't know anyone who thought Obama thought otherwise, but his statement bringing Jesus into it may hurt him with Hispanic voters.”

- Obama reflects on his children’s input in his decision -
PRESIDENT OBAMA IN AN ABC NEWS INTERVIEW WITH ROBIN ROBERTS: “It’s interesting, some of this is also generational. You know when I go to college campuses, sometimes I talk to college Republicans who think that I have terrible policies on the economy, on foreign policy, but are very clear that when it comes to same sex equality or, you know, sexual orientation that they believe in equality. They are much more comfortable with it. You know, Malia and Sasha, they have friends whose parents are same-sex couples. There have been times where Michelle and I have been sitting around the dinner table and we’re talking about their friends and their parents and Malia and Sasha, it wouldn’t dawn on them that somehow their friends’ parents would be treated differently. It doesn’t make sense to them and frankly, that’s the kind of thing that prompts a change in perspective.”

TRIVIA ANSWER
Woodrow Wilson gave his mother the ultimate present on this day in 1914: He issued a presidential proclamation that officially recognized the first national Mother’s Day.

Since Wilson’s first proclamation it has become customary for a president to issue a Mother’s Day proclamation. In 2011, President Obama issued a proclamation that spoke at length about the challenges facing women who are raising a family.

“Mothers are the rocks of our families and a foundation in our communities. In gratitude for their generous love, patient counsel, and lifelong support, let us pay respect to the women who carry out the hard work of motherhood with skill and grace, and let us remember those mothers who, though no longer with us, inspire us still,” Obama wrote.

The movement to get the holiday recognized started in 1912 with the establishment of the Mother’s Day International Association headed by Anna Jarvis of Webster, West Virginia. Interestingly enough, by the 1920s, Jarvis has become disgusted with the commercialization.

“A printed card means nothing except that you are too lazy to write to the woman who has done more for you than anyone in the world. And candy! You take a box to Mother — and then eat most of it yourself. A pretty sentiment,” she was known to tell people.

Whether you buy a card, candies or nothing at all, this is your four-day warning from Gut Check. Mother’s Day is Sunday.