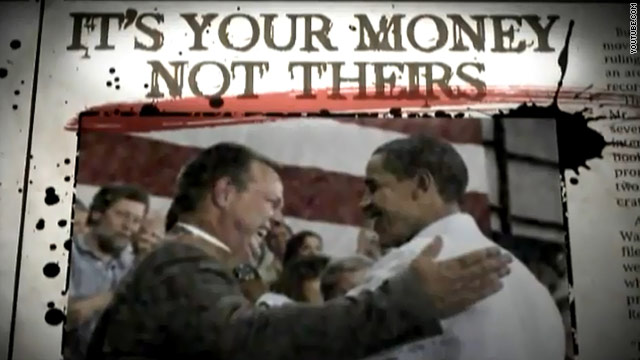 The 30-second spot and the first from Rehberg during this election cycle, says Tester voted for "higher taxes 55 times, to raise his own pay, spend your tax dollars on bonuses for Wall Street executives, give Obama his way with your money 95% of the time."

The president has already played a central role in the competitive Senate race with Rehberg capitalizing on Obama's low approval ratings in the state and Tester distancing himself from the leader of his party.

In an interview last month on MSNBC, Tester acknowledged the president "isn't doing well in a state like Montana," but added "this isn't about the presidential race. This is about the U.S. Senate race in Montana."

Tester campaign spokesman Aaron Murphy said Rehberg is attempting to make the race about national politics because "he knows he can't beat Jon Tester when it comes to holding himself accountable, defending our freedoms of making responsible decisions for Montana."

"This is Congressman Rehberg's first TV ad of this campaign, and because he has nothing better to run on, it's another negative attack on Jon Tester," Murphy said in an email.

A Gallup survey released last year indicated Obama had a 34% approval rating in the state, besting rates in only five other states. Obama lost the state in the 2008 election by just over two percentage points to then-GOP presidential nominee Sen. John McCain.

Tester was elected to the Senate by a slim margin in 2006, the year Democrats regained control of the upper chamber. The freshman senator has made government reform a top priority during his tenure, work on which was the subject of his most recent ad, released earlier this week.

Rehberg, a former lieutenant governor, is in his 6th term as the at large Montana representative in the House.

Recent polls show Rehberg and Tester locked in a tight race and non-partisan political handicappers Charlie Cook and Stuart Rothenberg list the race as a "toss up."