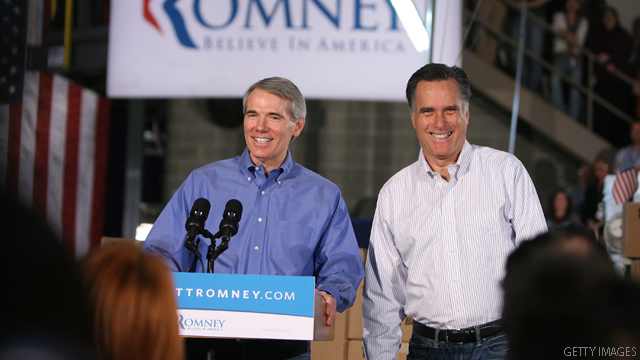 A new poll indicates the answer is no.

According to a Quinnipiac University survey released Thursday, the battle for the Buckeye State's 18 electoral votes is basically a tie right now. Forty-five percent of Ohio registered voters questioned in the poll say they are backing President Barack Obama, with 44% saying they support Romney, the former Massachusetts governor and presumptive GOP presidential nominee. Obama's one-point margin over Romney is well within the survey's sampling error.

The poll indicates the general election race remains a dead heat if Portman is chosen for the No. 2 spot on the Republican ticket, with Obama at 45% and Romney at 45%. The former congressman from Ohio, budget director and trade representative under President George W. Bush was elected to the Senate in 2010. His name has come up often lately as someone Romney may seriously be considering as his running mate.

"Republicans have never won the White House without Ohio and in 2004, for instance, George W. Bush won the state and re-election by 2%, so every little change is important," added Brown.

Surprisingly, nearly six in ten Ohio voters say they don't know enough about Portman to form an opinion, with 26% viewing him favorably and 14% having an unfavorable opinion.

According to the poll, 45% of independent voters say they would support a Romney-Portman ticket, with 39% backing the Obama-Vice President Joe Biden ticket.

The survey indicates Ohio voters are divided on how the president's handled his duties in office, with 49% saying they approve of the job he's doing and 48% saying they disapprove.

Ohio has proved crucial in recent presidential contests. It was the state that put President George W. Bush over the top in his 2004 re-election. Obama won the state by 5-points in his 2008 White House victory.

In the state's crucial Senate race, 46% of those questioned say they support Democratic incumbent Sen. Sherrod Brown, with 40% backing Ohio State Treasurer Josh Mandel, the GOP challenger. Brown had a ten-point lead over Mandel in Quinnipiac's March survey. Brown has a 42% to 38% margin over Mandel among independent voters.

The Quinnipiac University poll was conducted between May 2 and May 7, with 1,069 registered voters questioned by telephone. The survey's overall sampling error is plus or minus three percentage points.