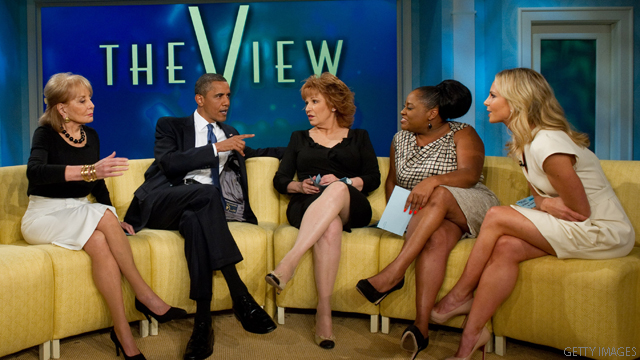 Source: Obama had planned marriage announcement on 'The View'

(CNN) – President Barack Obama planned to announce his support for same-sex marriage during an appearance on ABC's "The View" next week, before comments Sunday by Vice President Joe Biden caused a timeline change, a top Democrat told CNN.

A senior administration official said the president was booked to appear on the talk show for weeks. Following Biden's comments, the campaign expected he could address the issue then. However, they ultimately decided to move up the announcement and tell ABC News Wednesday. Obama will tape the interview on Monday, according to the official.

One source said Obama aides expected the issue to surface during the 2012 campaign because of the push for same-sex marriage to be included as part of the Democratic Party platform. They also expected it to be raised during the presidential debates.

Although the president did not originally plan to announce his policy shift Wednesday, the source told CNN the president planned to make his position clear prior to the Democratic Convention and the fall debates.

"I had already made a decision that we were going to probably take this position before the election and before the convention," Obama told ABC's "Good Morning America," referring to the Democratic National Convention in September.

Biden "probably got out a little bit over his skis, but out of generosity of spirit," the president said.

In addition to the president's taping for "The View" Monday in New York, Obama will attend an event hosted by openly gay Latino musician Ricky Martin and speak at the Barnard College commencement, during which Evan Wolfson, the founder of the pro-gay group Freedom to Marry, is expected to receive an award.