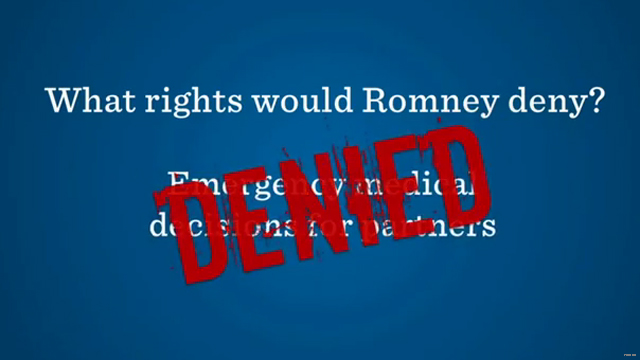 (CNN) – The Obama re-election campaign released a video Thursday to contrast the president's view on same-sex marriage with that of presumptive Republican presidential nominee Mitt Romney.

The web video plays President Barack Obama's comments from Wednesday's ABC interview in which he expressed support for same-sex marriage, followed by Romney's statements on the issue throughout the presidential campaign.

Text in the video accuses Romney of supporting policies that would work against same-sex couples hoping to receive the same benefits as those given to heterosexual couples.

Romney has said he believes marriage is between one man and one woman and that states should make decisions about domestic partnerships benefits.

The video plays a clip of Romney saying "3,000 years of human history shouldn't be discarded to quickly" and closes with a graphic that plays off their new slogan: "President Obama is moving us forward. Mitt Romney would take us back."

Thursday's video follows the president's decision Wednesday to publicly support same-sex marriage, after previously saying his opinions were "evolving" on the issue.

Romney reiterated his position after the president's remarks during a campaign appearance in Oklahoma City Wednesday.

"States are able to make decisions with regard to domestic partnership benefits such as hospital visitation rights, benefits and so forth, of various kinds can be determined state by state, but my view is that marriage itself is a relationship between a man and a woman and that's my own preference," he said at the Oklahoma Republican Party headquarters in Oklahoma City. "This is a very tender and sensitive topic as are many social issues, but I have the same view that I've had since running for office."

Team Romney did not immediately respond to a request for comment on the video.