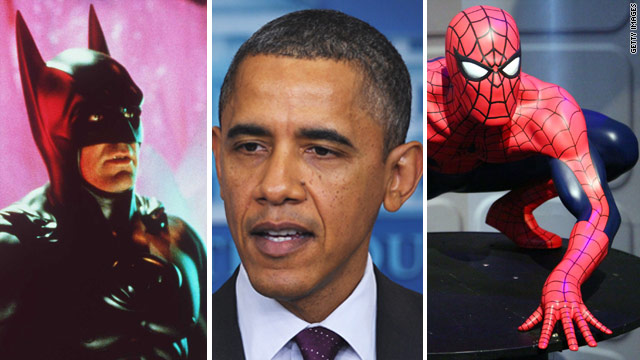 (CNN) - It was Gotham City vs. Spidey on the basketball court with President Barack Obama Friday morning.

Obama shot hoops with superheroes Batman and Spider-Man - or rather the silver screen actors who played them, George Clooney and Tobey Maguire - while rounding out a West Coast visit, a White House official said.

The president raked in $15 million at a Thursday fundraising dinner held on the basketball court at Clooney's Los Angeles home.

"And then I want to thank Clooney for letting us use his basketball court," Obama said to laughter at the fundraiser, according to a transcript provided by the White House. "This guy has been talking smack about his basketball game ever since I've known him. And we've actually known each other a while."

Maguire was among the star-studded guest list at the fundraiser, which also included Barbra Streisand, Billy Crystal, Robert Downey, Jr., and Salma Hayek.

A reporter caught up with Obama and asked about the game at a stop in Reno, Nevada.

"Of course George and I won," Obama said of Clooney. "But you know, I think we're all winners because nobody got hurt."

Basketball is one of Obama's go to stress-relievers. He was a member of the 1979 Hawaii state champion Punahou High School team, and in 2008, entered Indiana high school students who registered 20 of their classmates to vote in a raffle join him on the court for a three-on-three game. He has taken to the court with aides - most notably playing with his former personal aide Reggie Love, who was on the 2001 NCAA champion Duke team - and left the court once with a bloody lip.

After that incident, which required 12 stitches, Obama said his daughters took it easy on him in a game the next day. At the time, a White House official laughed when asked if the Congressional Hispanic Caucus Institute staffer who caused the bloody lip would receive a presidential pardon.

He has played several recent games at a court in the Washington FBI complex.

And on Sunday, Mitt Romney took in a game - a move which prompted a spat between NBA Hall of Famer Charles Barkley and Sen. John McCain, a top Romney supporter. The former Massachusetts governor was in the stands for a matchup between the Boston Celtics and Atlanta Hawks.

"You're going down, bro," Barkley said on a televised halftime show about Romney, prompting a Twitter response from McCain: "@MittRomney wins. Wanna bet?"