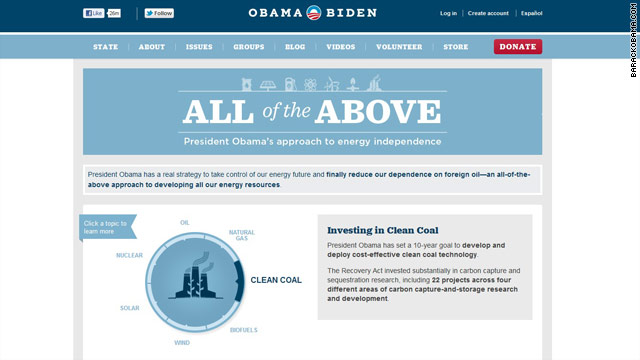 (CNN) – Mitt Romney's campaign says an update to the website of President Barack Obama's campaign is more than an update - it highlights an omission from the Obama administration's energy policy.

Reached by CNN on Friday, a spokesman for Obama did not dispute the Romney campaign's allegation.

The spokesman, Ben LaBolt, said clean coal is "an essential part of the Presidents all of the above energy strategy."

But Romney didn't back off from the issue at a campaign event on Friday, suggesting his campaign sees the issue as larger than a dot-com drop.

"He's making it harder and harder to get coal mines and coal used in this country, and yet he says he's for 'all of the above,' " Romney said in Charlotte, North Carolina. "And I couldn't figure out what he means because he's been fighting oil and coal and gas–and then it came to me. He's for all the sources of energy that come from above the ground, alright? And I'm for all the energy that comes from above the ground and below the ground."

The phrase "clean coal" refers to technologies which reduce the negative environmental impact of coal, one of the dirtiest of fossil fuels. The American Coalition for Clean Coal Technology, an industry group supporting adoption of these technologies, said the term "includes devices that increase the operational efficiency of a power plant, as well as those technologies that reduce emissions."

The president most recently highlighted his administration's clean energy efforts in his State of the Union address, when Obama called for investments and tax credits to encourage innovation and use of clean technologies, as well as reductions in energy waste.

In his 2011 address, Obama said set a clean energy goal: "By 2035, 80 percent of America's electricity will come from clean-energy sources."

"Some folks want wind and solar. Others want nuclear, clean coal, and natural gas," he said. "To meet this goal, we will need them all, and I urge Democrats and Republicans to work together to make it happen."

Seven months later, the fact checking website PolitiFact said the clean coal partnerships was "stalled," noting "the unlikelihood of any energy legislation in the 112th Congress" means the administrations "Clean Coal Power Initiative" was unlikely to expand beyond the three companies which ultimately received federal funding.

The clean coal addition to Obama's website was placed in a spot which previously touted the administration's fuel efficiency efforts.