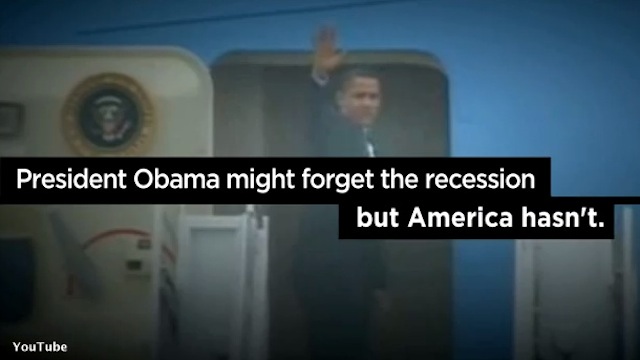 Washington (CNN) - National Republicans and Mitt Romney's presidential campaign are criticizing President Barack Obama for saying that "sometimes I forget" how bad the economy was when he took over in the White House in January 2009.

The Republican National Committee came out Friday morning with a web video that highlighted the quote from Obama, which the president made at a re-election campaign fundraiser Thursday afternoon in Seattle, Washington.

Obama, discussing the severe economic conditions that he inherited, said "it was a house of cards, and it collapsed in the most destructive, worst crisis that we've seen since the Great Depression. And sometimes people forget the magnitude of it, you know? And you saw some of that I think in the video that was shown. Sometimes I forget."

He continued: "In the last six months of 2008, while we were campaigning, nearly three million of our neighbors lost their jobs; 800,000 lost their jobs in the month that I took office. And it was tough. But the American people proved they were tougher. So we didn't quit. We kept going. Together we fought back."

The RNC's web video starts with a clip of the president's comments, then asks: "How can a sitting president forget about the recession?"

The video goes on to say that "76% of Americans say the economy is still in a recession" and that "middle class incomes have fallen down $4,300 under President Obama."

It ends by saying that "President Obama might forget the recession but America hasn't.'"

Thursday night the Romney campaign also criticized the president over the comment, with press secretary Andrea Saul saying, "It's not surprising that a president who forgot to create jobs, forgot to cut the debt, and forgot to change Washington has now admitted that he's forgotten about the recession. In fact, it seems that the President has forgotten that he's been in office for the last three-and-a-half years."

The Democratic National Committee is responding to the attacks on the president.

The economy remains, by far, the top issue for American voters, with jobs being the top economic concern. The Romney campaign wants to make the presidential election a referendum on Obama and what they consider the poor job he's doing creating jobs.

The president's re-election team continues to highlight the extremely rough economic conditions that he inherited, saying that Romney would bring back the failed polices that put the country in the recession in the first place.

The Labor Department reported last Friday that the nation's unemployment level edged down from 8.2% in March to 8.1% in April. The Labor Department also reported that the number of jobs rose by 115,000, lower than many economists had predicted. According to the report, 342,000 workers dropped out of the labor force, with the labor force participation rate, now at 63.6%, at its lowest level since 1981.