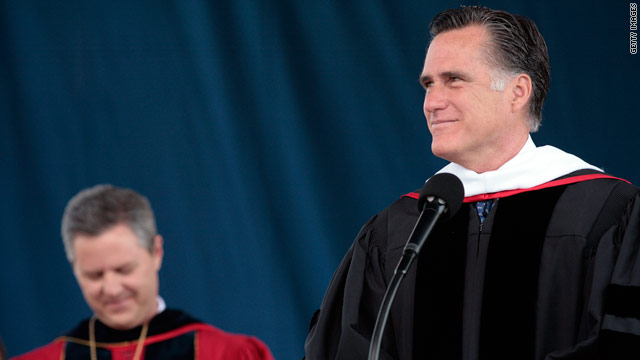 Among the shared values are Romney's view on marriage, which the GOP presidential candidate raised on Saturday for the first time in a speech since President Barack Obama announced on Wednesday that he personally supports same-sex marriages.

"Culture matters. As fundamental as these principles are, they may become topics of democratic debate," Romney said. "So it is today with the enduring institution of marriage. Marriage is a relationship between one man and one woman."

Romney said that "people of different faiths, like yours and mine, sometimes wonder where we can meet in common purpose, when there are so many differences in creed and theology."

"Surely the answer is that we can meet in service, in shared moral convictions about our nation stemming from a common worldview," he continued. “The best case for this is always the example of Christian men and women working and witnessing to carry God's love into every life."

His invitation to keynote the graduation was initially eyed skeptically by some students and others, who took to social media in protest of the Mormon's presence.

But Romney never mentioned his Mormon faith, and both he and the school sought to look past their differences.

The trustee board executive committee chair Mark DeMoss introduced Romney and encouraged the audience to recognize the difference between knowing someone personally, and simply knowing of them.

"You see, you can know about someone simply by reading about him or her," he said. "But you can only know someone by spending time with them."

DeMoss, who is also a senior advisor to Romney's campaign, recounted a meeting between Romney and the late Falwell, whose son is now chancellor of the school, as well as his own support of the candidate, which stretches back to Romney's term as governor of Massachusetts.

Romney offered a tribute to Falwell, who founded Liberty 40 years ago, remembering him as "courageous and big-hearted minister of the Gospel."

He praised the school for instilling "conviction and confidence" in its students, and lauded the graduates' "moral certainty, clear standards, and a commitment to spiritual ideals," which they share with other greats from history.

"Christianity is not the faith of the complacent, the comfortable or of the timid. It demands and creates heroic souls like Wesley, Wilberforce, Bonhoeffer, John Paul the Second, and Billy Graham," he said. "Each showed, in their own way, the relentless and powerful influence of the message of Jesus Christ. May that be your guide."

Some students, such as J.D. Wilkinson, a worship and music studies major from Springfield, Massachusetts, told CNN that they liked that Romney spoke out on the same-sex marriage issue.

"This school has always been about being not politically correct, just saying it, just telling the truth how it is and I thought he did that," Wilkinson said. "I think that's fresh in today's world and I think that's needed."

Another, Michael Kildare, said he doesn't identify strongly with a particular political party but is open to hearing more about Romney after today's speech. Kildare, who is from Orlando, Florida, will return to his home city to take a job as a computer technician.

"I was kind of skeptical at first but he definitely said some things that I have to take into consideration," he said. "He's definitely a good candidate for the presidency and I definitely look forward to his other speeches and other campaign ideas."

Romney did let his politics slip into his remarks, including an apparent jab at President Barack Obama.

"Lately, I've found myself thinking about life in four-year stretches," he told the 6,000 graduates present. "And let's just say that not everybody has achieved as much in these last four years as you have."

In a sign that the heated GOP primaries are behind him, Romney tipped his hat to former Sen. Rick Santorum of Pennsylvania, crediting his one-time rival for sharing statistics which support his own marriage stance. And Romney recalled the challenges of those primaries when he recognized restaurant founder Truett Cathy, who Liberty University recognized for his philanthropic efforts.

"The Romney campaign comes to a sudden stop when we spot a Chick-fil-A," Romney said. "Your chicken sandwiches were our comfort food through the primary season, and heaven knows there were days that we needed a lot of comfort."

Looking out at the graduates, who he noted are entering the job market, the presidential candidate teased about his current occupational hopes.

"Promotions often mark the high points in a career," he said. "I hope I haven't seen the last one of those."