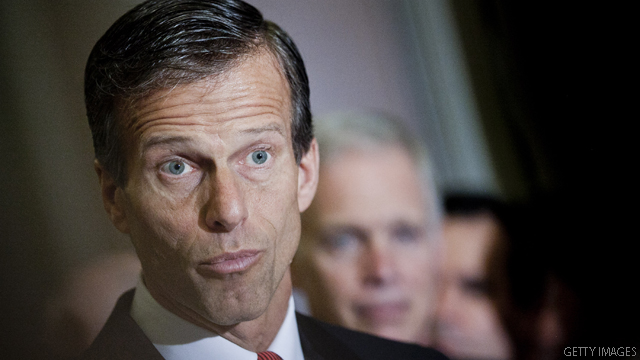 Thune doesn't say no to No. 2 spot

(CNN) – Republican Sen. John Thune on Sunday said he doesn't hold "aspirations" to serve as Mitt Romney's running mate in 2012, but did not rule out accepting a potential offer.

When asked if he would say "yes or no" to the No. 2 spot if it was offered, the South Dakota senator and early Romney backer said he is keeping his options open.

"You never rule out opportunities or options when you're involved in public life and you say you want to make a difference. If you're serious about that, obviously you don't foreclose options," Thune said on "Fox News Sunday."

Thune, now in his second term, reiterated his pledge to help the presumptive GOP presidential nominee while he attempts to "make a difference" in his current role as a senator.

"That's the job I have. I don't aspire to anything else," Thune said. "Obviously, the Romney team, his campaign team are going to carefully vet some folks that they're looking at. We've got a lot of good options out there, and I just hope to contribute in some way to the success of this ticket in the fall."

The third-ranking Senate Republican decided against a presidential bid of his own in February 2011 and has been mentioned by political observers as a potential vice-presidential candidate. Thune has enjoyed a relatively high profile since he ousted three-term incumbent and Democratic leader Tom Daschle from his Senate seat in 2004.

Romney appointed Beth Myers in April to lead his search for a running mate, a process the former Massachusetts governor has said he hopes remains out of the public sphere.