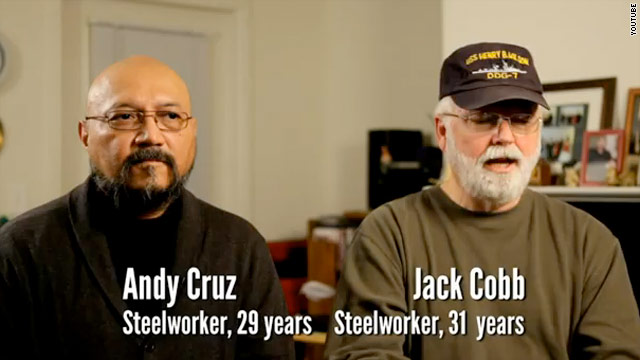 Bain is back as Obama camp probes Romney's record

After lying dormant for months, Mitt Romney's record as a private equity executive returned to the forefront in the race for the White House Monday as President Barack Obama's re-election team launched an assault on the Republican's record in the 1980s and 90s.

The attack focuses on Bain's history at one company, Kansas City-based GST Steel. The Obama team portrays the firm as a victim of Romney's brand of capitalism gone wrong. A two-minute television ad running in Iowa, Pennsylvania, Ohio, Virginia and Colorado – all battleground states – features former GST Steel workers lamenting the fact that they lost their jobs following Bain's takeover. A campaign official said the spot would run on evening newscasts in "targeted markets" on Wednesday, but wouldn't elaborate on how much the campaign spent to air the ad.

"They made as much money off it they could," says Dale Soptic, who the Obama campaign says worked as a steelworker for 30 years. "They closed it down, they filed for bankruptcy without any concern for the families or communities."

The workers featured in the ad say Romney's record as Bain's chief executive is a good indicator of how'd he's approach the presidency.

"He's running for president, and if he's going to run the country like he ran our business I don't want him there," Soptic says in the television spot. "He would be so out of touch with average people in this country. How could you care, how could you care for the average working person if you feel that way?"

Another steelworker, Jack Cobb, slams Bain in the ad as being like a "vampire."

"They came in and sucked the life out of us," Wiseman said. "It was like watching an old friend bleed to death."

GS Industries was acquired by Bain Capital in 1993, when Romney was acting as the firm's chief executive. The firm declared bankruptcy in 2001, after Romney had ceased day-to-day oversight of Bain.

"He set this in motion. It was his stucture that was put in place," Cutter said, noting Romney was still profiting from Bain at the time the company went bankrupt.

Romney's campaign spokesman Andrea Saul responded to the ad Monday, saying the campaign would "welcome the Obama campaign's attempt to pivot back to jobs and a discussion of their failed record. Mitt Romney helped create more jobs in his private sector experience and more jobs as Governor of Massachusetts than President Obama has for the entire nation."

Saul continued, "President Obama has many questions to answer as to why his administration used the stimulus to reward wealthy campaign donors with taxpayer money for bad ideas like Solyndra, but 23 million Americans are still struggling to find jobs. If the Obama administration was less concerned about pleasing their wealthy donors and more concerned about creating jobs, America would be much better off."

Monday's attack on Romney's record at Bain comes months after the issue first surfaced during the race for the Republican presidential nomination. Romney's opponents, principally former House Speaker Newt Gingrich and Texas Gov. Rick Perry, used the Bain record to slam Romney as out-of-touch with the struggles of working-class Americans.

Former candidate Perry, then reaching the end of his presidential bid, called Romney's Bain record "indefensible" ahead of the South Carolina primary in January.

"There is something inherently wrong when getting rich off failure and sticking it to someone else is how you do your business," Perry. "And I happen to think that is indefensible."

In defending himself against attacks on his record at Bain in the past, Romney has pointed to the several successful companies his firm helped turn around, including Staples and Sports Authority.

He has also slammed rivals for criticizing Bain's record, saying they amounted to an attack on free enterprise.

Cutter said Monday the focus on Romney's record at Bain remained an effective campaign tactic, even though Republicans used a similar strategy.

"If you take a look at how Bain Captial was discussed through the Republican primaries, putting aside whether it was done well, it really was damaging to Mitt Romney. He consistently lost the middle class vote in every primary until he was the de facto nominee."