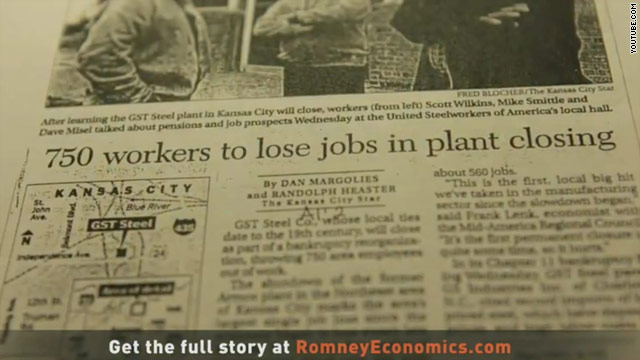 Washington (CNN) - The Obama re-election campaign so far has bought about $64,000 worth of ad time in five key battleground states to air a new two-minute advertisement attacking Bain Capital and Mitt Romney’s record heading the private equity firm, according to a Republican source who tracks ad buys.

The source said the buy information is preliminary because more details about the buy in additional media markets is still coming in, but it is clear that the campaign is not spending very much on this ad, and is instead hoping to garner tons of free news media attention from it. The campaign held a conference call Monday morning after announcing the ad.

One source with knowledge of the buy said the total will be less than $100,000.

The ad focuses on the firm’s handling of one steel company, Kansas City-based GST, which Bain acquired while Romney led the firm. The commercial paints Bain as a vampire for coming in and decimating the company, which eventually filed for bankruptcy which occurred after Romney had left Bain.

The campaign refused to discuss how much it will be spending. The two-minute spot is running Wednesday night during the evening news in Colorado, Iowa, Ohio, Pennsylvania and Virginia.

The sources refused to speak on the record because the information is considered confidential.

One aim of this commercial and the media coverage it is generating is to drive voters to a website run by the re-election campaign where people can see a 6-minute video attacking Bain Capital and see more about Romney’s record there. Democrats deployed a similar tactic in November, when the Democratic National Committee attacked his shifting positions on issues by airing an ad that talked about Romney being “trapped” in two different bodies. The ad drove people to a website that Democrats say generated hundreds of thousands of views.