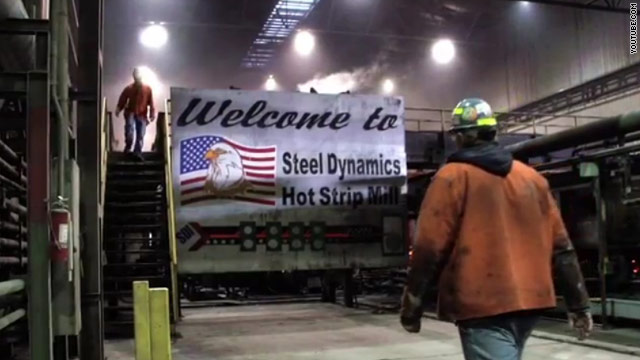 Romney's team pointed to Steel Dynamics in the web video, which is thriving more than a decade after an investment from Bain Capital, the private equity firm Romney founded and ran in the 1980s and 90s.

The video features workers calling Steel Dynamics "the perfect entrepreneurial story," and noting the company has more than 6,000 employees. The company's success can be traced to Romney, one worker asserts.

"SDI almost never got started," the worker in the ad says. "When others shied away, Mitt Romney's private sector leadership team stepped in."

Romney and Bain's investment led to greater social mobility for Steel Dynamics employees, one man says in the spot.

"One of the hardest things to do is move up a socioeconomic status in a generation. I said because of this company, I'm able to do that with my family," a worker says.

The Romney campaign web video comes after Obama's team began a multi-pronged assault on the Republican's time as chief executive of Bain, highlighting GST Steel, which didn't fare as well as Steel Dynamics.

Workers featured in a 2-minute Obama ad claim Bain and Romney gutted the company for a profit, and left it to go bankrupt.

"They came in and sucked the life out of us," one worker said in the Obama ad. "It was like watching an old friend bleed to death."

GST Steel went bankrupt in 2001, after Romney had given up day-to-day involvement in Bain's business dealings. He remained the company's CEO, however, and continued to profit from its investments.

Romney frequently used Steel Dynamics, along with Staples and Sports Authority, to defend himself against attacks of his Bain record during the Republican primary. At the time, he was weathering attacks from GOP rivals who said his time running Bain was indicative of a reckless attitude toward American workers.

A Los Angeles Times report from January indicated Steel Dynamics enjoyed millions of dollars in government subsidies and tax breaks from the state of Indiana and the county where the company is based.