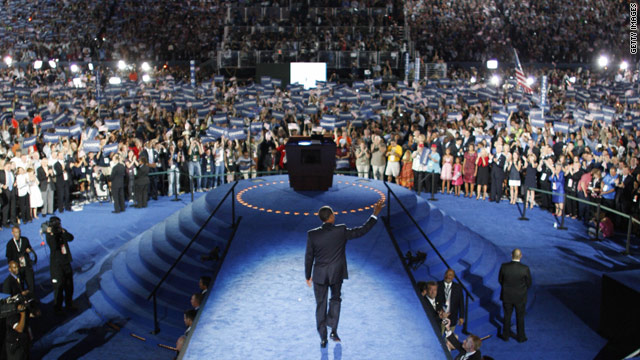 (CNN) - President Barack Obama plans to deliver an acceptance speech on the night of the MTV Video Music Awards in September.

Obama's speech, however, won't be for a statuette of one of the moonmen.

Instead, he is planning to accept the Democratic presidential nomination at the Bank of America Stadium in Charlotte, North Carolina, on September 6, the same evening that greats of the pop, hip hop, and top 40 music industry will accept MTV's moonmen statuettes at Los Angeles' Staples Center.

An MTV spokeswoman told CNN the station would air the awards from 8 p.m. to 10 p.m. Eastern, rather than their usual 9 p.m. to 11 p.m. "to avoid conflict with the Democratic National Convention proceedings that evening."

Obama accepted the 2008 Democratic nomination at Denver's Mile High Stadium, and this year's venue can hold up to 80,000 people.

- CNN's Jessica Yellin and Michelle Jaconi contributed to this report.