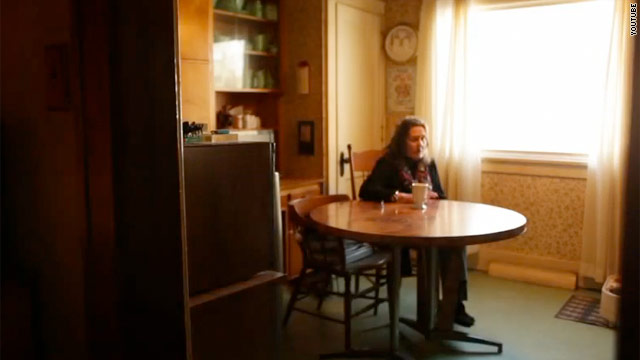 The spot, called "A Few of the 23 Million," features three workers in Iowa who have lost jobs or are struggling to make ends meet. Romney returns to the general election battleground Tuesday to deliver an address on America's federal debt. The Bureau of Labor Statistics estimated in their April jobs report that 12.5 million Americans were unemployed. When people who were underemployed or who dropped out of the workforce were included in the calculation, the number increased to 23 million.

Deborah Ragland, who the narrator of the video says lives in Webster City, Iowa, says in the spot she's been looking for a job for two years, and that her unemployment benefits recently ran out.

"We're just going to sit tight and see how things go, and see if the next president turns it around," Ragland says at the end of the ad.

Another Iowan, Tony Knapp, says his family's mentality of self-sufficiency has made it tough to accept unemployment benefits from the government.

"My dad doesn't like me getting unemployment," Knapp says in the spot. "He hates it. Because he grew up in that mentality that you don't get unemployment. You don't live off the government. You do everything, you pay for everything your own way."

Promises from Obama during the 2008 election haven't been fulfilled, Knapp says.

"That's the problem," Knapp says. "A lot of people around here when Barack was running and all that, everyone believed, everyone had hope. They all thought 'Man, this guy's gonna get something done.'"

He continues, "When he is in office now it just seems like nothing's getting done. It seems like it's all talk. You can say whatever you want. But it's not about saying what everyone wants to hear, it's about doing it."

The narrator in the ad concludes: "Hope and change has not been kind to millions of Americans, but they still believe in this great country, and deserve a leader who believes in them: Mitt Romney."

“Mitt Romney would like Americans to forget that when President Obama took office, we were in the middle of an economic crisis and losing 750,000 jobs a month," Smith wrote in a statement. "But because of the President’s focus on getting us out of the crisis and strengthening the middle class, we’ve seen over 4.2 million private sector jobs created over the last 26 months. Mitt Romney’s record in both the private and public sectors, on the other hand, was one of helping the wealthiest prosper by any means necessary, even if it meant undermining workers and middle class families."

Romney's focus on the economy and jobs comes after a week in which the general election campaign focused largely on same-sex marriage. Obama, for the first time, endorsed legal same-sex marriage in an interview last Wednesday.

The Republican National Committee, along with Romney's campaign, said Monday they would spend the week focusing on the ballooning national debt, releasing a web video yesterday and pushing toward Romney's Tuesday speech in Des Moines.

Romney has consistently said he is a better candidate to turn the American economy around, citing his experience as a businessman in the 1980s and 1990s. Democrats counter his time as a private equity executive disqualifies him from being an effective job creation, since many of the businesses his firms invested in shed thousands of jobs in the attempt to become profitable.