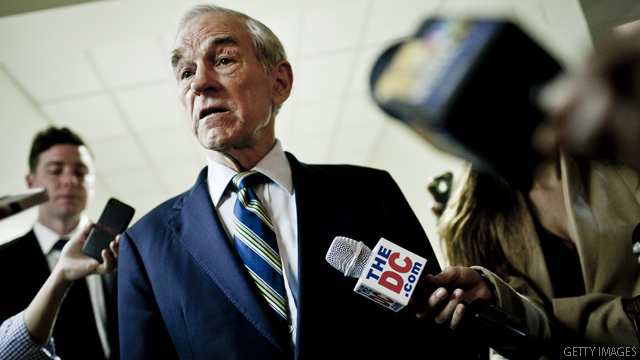 (CNN) – Despite the announcement he will not channel campaign resources into upcoming primary states, Ron Paul is scheduled to make campaign stops and plans to build upon his delegate count, according to his campaign.

On Tuesday, Paul campaign chairman Jesse Benton said the Republican presidential candidate and Texas congressman is slated to speak at the Minnesota state convention this weekend and at the Texas convention in June, while also engaging in other speaking opportunities.

Although Paul has not suspended his campaign, Benton acknowledged Romney will likely capture the Republican nomination, but said it is still too early for a potential endorsement of the Massachusetts governor.

"At this point that's still premature because Dr. Paul is still a candidate," Benton said on a conference call with reporters. "I would never say never. I do not believe that that is likely, but you know we don't deal in absolutes and close everything out. Dr. Paul is willing to listen."

On Monday, Paul's campaign said it would shift its focus from upcoming primary states to securing delegates ahead of the Republican convention in Tampa, Florida in late August.

Going forward, Benton said the three-time White House hopeful will continue pushing his message and offer assistance to his supporters and delegates.

Paul has the backing of 112 delegates, according to the most recent CNN estimate. Benton said Team Paul hopes to increase that count and remains optimistic they may still capture additional delegates in Washington, Missouri, Louisiana and Iowa.

Benton said the Paul and Romney campaigns have participated in "a couple of conference calls," during which the Romney camp indicated they would consider some language representative of Paul's stances, including on reforms to the Federal Reserve, indefinite detention and internet freedom.

Paul's campaign had $1.8 million cash on hand as of April 1 and Benton said the campaign's fundraising via mail and the internet has remained "strong." The campaign will continue fundraising, including through one of their signature Money Bomb's on May 17, funds from which will go toward convention and delegate efforts, Benton said.

As for a speaking role at the Republican convention in August, Benton said there has not been a discussion of a speech to date.

Throughout Tuesday's conference call Benton pushed for Paul supporters, who are known for their enthusiastic tactics, to remain respectful as they act as surrogates for the candidate, particularly at the August convention. He also painted the next months as an opportunity to set the stage for other "liberty candidates" in the future.

"We are emphasizing decorum and we are going to do everything in our power to make sure to work with our supporters, to make sure that decorum and respect are the name of the game and that dominates our playbook," Benton said. "Moving forward we're going to become an even stronger voice in the party."