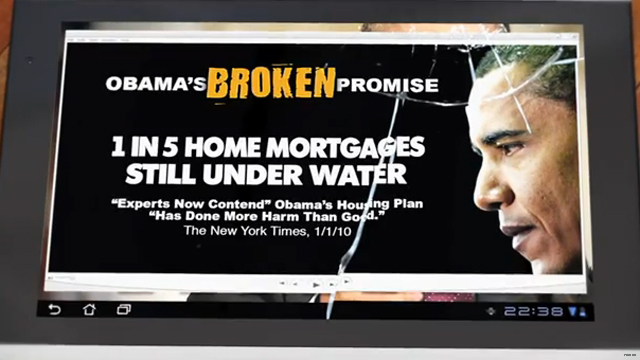 Washington (CNN) - An independent group co-founded by Karl Rove says it's going up with new TV commercials that claim that President Barack Obama has broken promises when it comes to homeowners facing foreclosure, taxes, health care coverage and cutting the deficit.

Crossroads GPS announced Wednesday morning that they will spend $8 million to run their ads in ten battleground states between now and the end of May, and they add that they'll spend $25 million total to air the spots over the next four weeks.

"President Obama's agenda promised so much," says the narrator in the ad, which then includes a clip from June 2008 of then-presidential candidate Obama saying "we must help the millions of homeowners facing foreclosure." The narrator picks up, saying "promise broken. One in five mortgages are still under water."

Crossroads President Steven Law, in a release, said "President Obama made commitments on core issues to the American people, and this ad holds him to account. Our country faces serious economic and fiscal problems which require practical solutions and not just promises. If we don't hold Washington politicians accountable, we won't fix these problems that are holding our country back."

A top Democrat is highlighting a promise he says Romney's made.

"The most important promise in this race is the one Mitt Romney made to the billionaires and oil companies financing these ads. Romney promised them massive new tax cuts while slashing Medicare for seniors and cutting education for the middle class. If Mitt Romney, Karl Rove, and their billionaire backers win, the middle class loses," says Bill Burton, the co-founder of Priorities USA, the pro-Obama super PAC, and former deputy press secretary in the Obama White House.