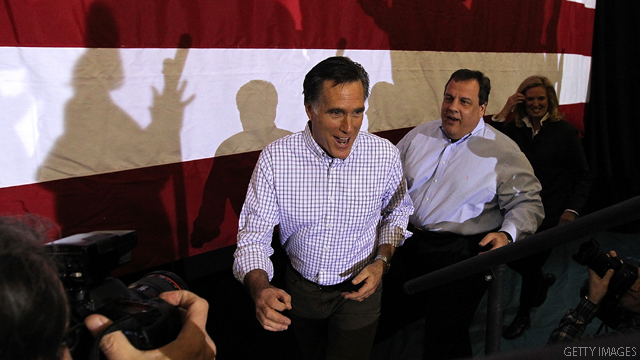 (CNN) – New Jersey voters do not think Republican Gov. Chris Christie would be content serving as vice president, according to a new poll.

The Quinnipiac University survey released Wednesday showed 52% of Garden State voters think their governor would not be satisfied in the No. 2 spot. Although 49% of likely Republican voters said he would be content, all other political, gender and regional groups disagreed.

The blunt first-term governor is often mentioned as a potential running mate for Mitt Romney, the presumptive GOP presidential nominee, a suggestion downplayed by Christie. He has often said he lacks the personality befitting a vice president, but recently left the door slightly ajar by saying Romney "might be able to convince" him.

However, a Christie pick would not help Romney in New Jersey, despite his high approval rating, the poll found.

The disparity was influenced by a gender gap that showed men picked the Republican slate, 46% to 43% and women chose the Democratic ticket, 56% to 38% in the blue presidential state.

Obama won the state in the 2008 presidential election with 56.8% of the vote to then-GOP presidential nominee John McCain's 42.1%.

Obama and Christie topped the list of favorite national leaders among New Jersey voters. Obama received a 54% to 41% favorability rating and Christie garnered a 53% to 39% score. Additionally, 53% of voters approved of Obama's handling of his job and 52% said he deserved re-election.

Quinnipiac University surveyed 1,582 registered voters between May 9 and May 14 with a sampling error of plus or minus 2.5 percentage points.